• Fast and easy processing - Rapid spin-column format allows for the processing of 10 samples in 45 minutes.
• No genomic DNA contamination in cytoplasmic fraction - Purified cytoplasmic RNA can be used directly in RT-PCR reactions with no DNase treatment required.
• No phenol or chloroform extractions
• Isolate a diversity of RNA species - All nuclear and cytoplasmic RNA species, from large mRNA species down to microRNA (miRNA) and small interfering RNA (siRNA) can be isolated in high quality.
• This kit is available in both 50 prep and 100 prep sizes

Norgen’s Cytoplasmic & Nuclear RNA Purification Kit provides a rapid method for the isolation and purification of both cytoplasmic and nuclear RNA from cultured animal cells and small tissue samples. In certain circumstances it is desirable to be able to isolate fractionated RNA as opposed to total RNA. For example, it may be preferable to isolate only mature,cytoplasmic RNA for some studies on expression profiling. Alternatively it may be desirable to isolate nuclear RNA in order to investigate and study pre-processed (non-spliced) RNA. Furthermore, this kit can be used to isolate RNA for downstream applications where it is necessary to avoid DNA contamination, since the cytoplasmic fraction has been shown to be free of all traces of genomic DNA. Norgen’s Cytoplasmic & Nuclear RNA Purification Kit can be used to isolate all sizes of RNA from the cytoplasmic and nuclear RNA fractions, including all small RNA species. The kit is supplied with sufficient reagents to perform either 50 cytoplasmic RNA preparations or 25 cytoplasmic and 25 nuclear RNA preparations. The isolated high quality RNA is suitable for use in downstream applications including real-time PCR, reverse transcription PCR, Northern blotting, RNase protection and primer extension, and expression array analysis. 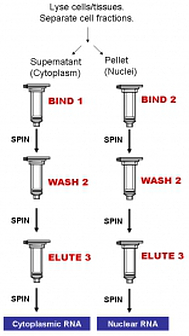 Norgen´s Purification Technology
Purification is based on spin column chromatography using Norgen´s proprietary resin as the separation matrix. The cytoplasmic RNA is preferentially purified from the nuclear RNA and other cellular components such as proteins, without the use of phenol or chloroform. The process involves first lysing the cells or tissue of interest with the provided Lysis Solution. The lysate is then separated through centrifugation, with the supernatant containing the cytoplasmic RNA and the pellet containing the nuclear RNA. Binding solution and ethanol is then added to the desired fraction, and the solution is loaded onto a spin-column. Norgen´s resin binds RNA in a manner that depends on ionic concentrations. Thus only the RNA will bind to the column, while the contaminating proteins and genomic DNA will be removed in the
flowthrough or retained on the top of the resin. The bound RNA is then washed twice with the provided wash buffer in order to remove any remaining impurities, and the purified RNA is eluted with the elution buffer. The purified RNA is of the highest integrity, and can be used in a number of downstream applications including real time PCR, reverse transcription PCR, Northern blotting, RNase protection and primer extension, and expression array assays. 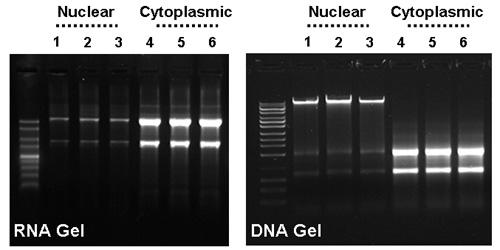 Genomic DNA-free Cytoplasmic RNA. RT-PCR was performed using human beta actin primers on 2 µL of the 50 µL of cytoplasmic RNA isolated from 1 million HeLa cells using Norgen´s Cytoplasmic & Nuclear RNA Purification Kit. Lane M is Norgen’s PCR Sizer DNA ladder, Lanes 1 and 3 are the negative control (PCR only, without reverse transcript), and Lanes 2 and 4 are the actual RT-PCR that show the expected 166 bp RT-PCR product. The expected amplicon size from the gene copy is the same as that from the RNA transcript. The lack of product in lanes 1 and 3 indicates that no genomic DNA contamination is present in the isolated cytoplasmic RNA. All PCR products were resolved on a 1X TAE, 2% agarose gel.