Norgen’s Plant microRNA Purification Kit provides a rapid method for the isolation and purification of small RNA molecules (< 200 nt) from cultured plant cells or plant tissues. These small RNAs include regulatory RNA molecules such as microRNA (miRNA) and short interfering RNA (siRNA), as well as tRNA and 5S rRNA. Small RNA molecules are often studied due to their ability to regulate gene expression. miRNAs and siRNAs are typically 20-25 nucleotides long, and regulate gene expression by binding to mRNA molecules and affecting their stability or translation. The small RNA molecules isolated using Norgen’s Plant microRNA Purification Kit can be used in various downstream applications relating to gene regulation and functional analysis, including RT-PCR, miRNA sequencing, northern blotting and microarray analysis.

Norgen’s Purification Technology
Purification is based on spin column chromatography using Norgen’s proprietary resin as the separation matrix. Norgen’s resin binds RNA in a manner that depends on ionic concentrations. The small RNA molecules are preferentially purified from other cellular components such as ribosomal RNA without the use of phenol or chloroform. The process involves the use of two different spin columns: the Large RNA Removal Column and the microRNA Enrichment Column. Briefly, the cells or tissues of interest are lysed using the provided Lysis Buffer, and ethanol is then added to the sample. The lysate is then applied to the Large RNA Removal Column, and the larger RNA molecules will bind to the resin in the spin column while the smaller RNA species will pass through into the flowthrough. Ethanol is then added to the flowthrough, and the sample is applied to the microRNA Enrichment Column. The small RNA molecules will then bind to the resin, and any impurities are removed through a series of washes with the provided Wash Solution. The small RNA molecules are then eluted using the Elution Solution, and are ready for use in various applications. 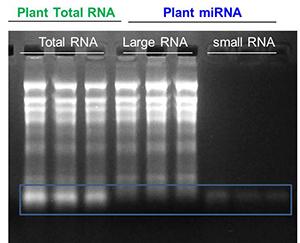 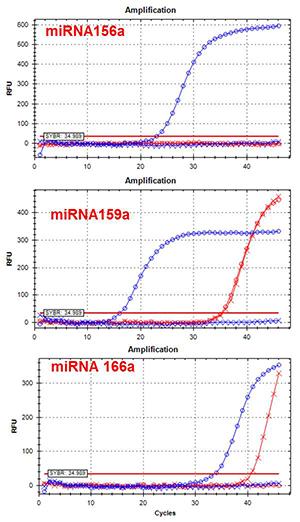 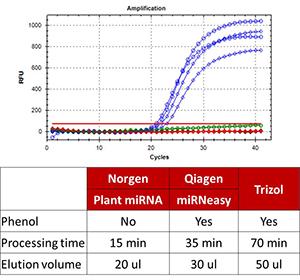