Norgen’s Urine Exosome RNA Isolation Kit provides a rapid procedure for the isolation of exosomal RNA from urine samples. Exosomes are 40 - 100 nm membrane vesicles, which are secreted by most cell types. Exosomes can be found in saliva, blood, urine, amniotic fluid and malignant ascite fluids, among other biological fluids. Evidence has been accumulating recently that these vesicles act as cellular messengers, conveying information to distant cells and tissues within the body. The exosomes contain cell-specific proteins, lipids and RNAs, which are transported to other cells, where they can alter function and/or physiology. These exosomes may play a functional role in mediating adaptive immune responses to infectious agents and tumours, tissue repair, neural communication and transfer of pathogenic proteins. Recent work has demonstrated the presence of distinct subsets of microRNAs within exosomes which depend upon the tumour cell type from which they are secreted. For this reason exosomal RNAs may serve as biomarkers for various diseases including cancer. As the RNA molecules encapsulated within exosomes are protected from degradation by RNAses they can be efficiently recovered from biological fluids, such as urine. Norgen’s Urine Exosome RNA Isolation Kit makes exosomal RNA discoveries simple, rapid and reliable. Users can simultaneously concentrate and isolate high quality exosomal RNA, including microRNA, fully compatible with various downstream applications relating to gene regulation and functional analysis, including RT-PCR, northern blotting and microarray analysis. 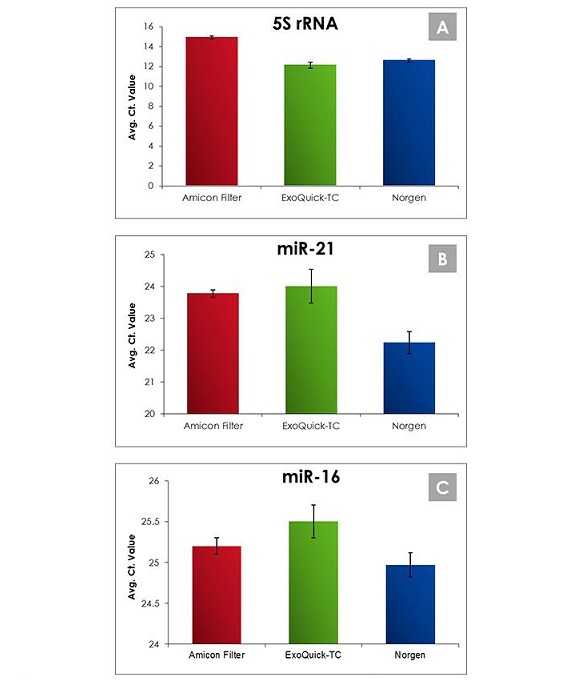