• Isolate total RNA, from large rRNA down to microRNA (miRNA)
• Isolate high quality total RNA with complete size range from a variety of sources, even from plasma and serum
• Isolate viral RNA from swab samples
• RNA can be isolated and detected from as little as a single animal cell (see application note - link below)
• No phenol or chloroform extractions
• Fast and easy processing (Lack of phase extraction step allows for easy automation/high throughput applications)
• 96-well plates can be rapidly processed in 30 minutes with vacuum manifold or centrifuge. No need for special equipment.
• Kits with spin columns for individual preparations also available

Norgen’s Total RNA Purification 96-Well Kit provides a rapid method for the high-throughput isolation and purification of total RNA using a 96-well format in 30 minutes. The kit purifies all sizes of RNA, from large mRNA and ribosomal RNA down to microRNA (miRNA) and small interfering RNA (siRNA) without the use of inhibitory phenol or chloroform. Total RNA can be isolated from a broad range of sample sources including cultured cells, tissues, blood, serum, plasma, bacteria, yeast, fungi, plants and viruses. The kit is highly sensitive, as RNA can be isolated from as little as a single cell.

Purification is based on 96-well spin column chromatography using Norgen’s proprietary Silicon Carbide (SiC) resin as the separation matrix. Purification can be performed on either a vacuum manifold or using centrifugation. Briefly, the cells or tissue of interest is first lysed using the provided Lysis Solution, ethanol is added and the RNA is bound to Norgen´s 96-well filter plates . Under these conditions only the RNA will bind to Norgen´s resin while most of the contaminating cellular proteins are removed in the flowthrough or retained on top of the resin. The bound RNA is then washed to remove any remaining impurities. Lastly, the purified total RNA is eluted into 75 uL of the provided Elution Buffer or water.

Norgen’s proprietary Silicon Carbide resin provides superior affinity to the full size range of RNA molecules, resulting in large and small RNA (miRNA) purification with excellent consistency and sensitivity. The purified RNA is of the highest integrity, and can be used in a number of downstream applications including real time PCR, reverse transcription PCR, Northern blotting, RNase protection and primer extension, expression array assays, miRNA cloning and Next Generation Sequencing. 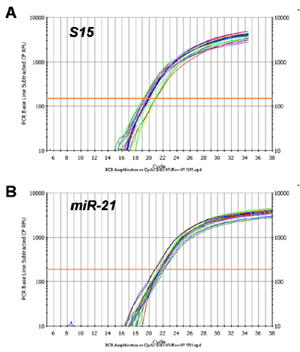 Consistent Isolation of Total RNA, including microRNA:
Total RNA was isolated from samples of 5 x 10^5 HeLa cells using Norgen’s Total RNA Purification 96-Well Kit. Aliquots of each total RNA sample were then used in 2 different RT-qPCR reaction. In the first RT-qPCR the S15 gene of mRNA was amplified (Panel A), and in the second RT-qPCR reaction the miR-21 microRNA was amplified (Panel B). Both the mRNA and microRNA were amplified in a consistent manner from all the samples, with low variability of the C T values. Thus both types of RNA are being consistently isolated using this kit. 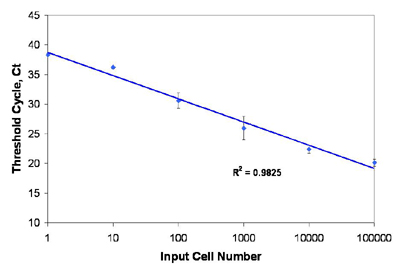 Norgen’s Total RNA Purification Kit allows sensitive RNA extraction from even less than 10 cells. RT-qPCR was used to detect mRNA isolated from various input amounts of HeLa cells, from 100,000 down to a single cell, using Norgen’s Total RNA Purification 96-Well Kit. Ten microliters of the 75 µL isolated RNA was then subjected to a 20 µL reverse transcription using oligo dT primer. Three microliter of the reverse transcription was used in a 20 µL real-time PCR reaction with primers to detect the human S15 transcripts. The resulting Ct values were plotted against the input cell number. Total RNA was isolated and detected linearly from as little as a single HeLa cell.