TagYFP Use
TagYFP is mainly intended for protein labeling. It can also be used for cell and organelle labeling and for tracking the promoter activity.
TagYFP´s successful performance in fusions has been demonstrated on the example of mitochondrial localization signal (N-fusion), cytoplasmic β-actin, and α-tubulin (C-fusions). The corresponding vectors were transiently transfected into mammalian cells. In all cases, an expected signal distribution was observed within 12 hrs after transfection. 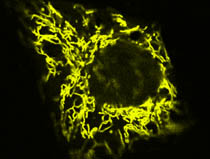 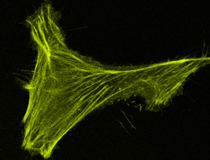 TurboYFP Use
TurboYFP is mainly intended for applications where fast appearance of bright fluorescence is crucial. It is specially recommended for cell and organelle labeling and for tracking the promoter activity. Despite its dimeric structure, TurboYFP is still suitable for generation of fusions.
Both pTurboYFP-C and pTurboYFP-N vectors can be used to express TurboYFP alone in mammalian cells, however pTurboYFP-N vector is preferable for this application. 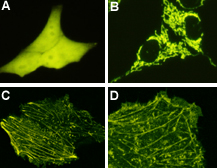