FusionRed is a red fluorescent protein characterized by improved performance in fusions and low toxicity [Shemiakina et al., 2012, Nat Commun. 2012; 3 :1204. / pmid: 23149748].
FusionRed lacks the residual tendency of other monomeric RFPs to dimerize at high concentration and behaves as a pure monomer at concentrations up to 10 mg/ml in HPLC analysis. Such "supermonomeric" properties ensure superior efficiency of FusionRed in protein labeling applications, especially in cells with high expression level.

FusionRed is mainly intended for protein labeling and long-term experiments including generation of transgenic animals. 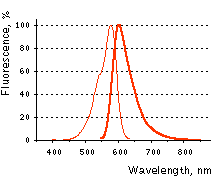 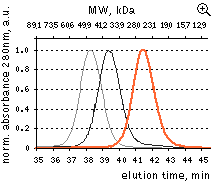 * Brightness is a product of extinction coefficient and quantum yield, divided by 1000.
** Purified recombinant protein behaves as a pure monomer at concentrations of 10 mg/ml as verified by high-performance liquid chromatography (HPLC)
*** Time to bleach 50% of fluorescent signal brightness.

FusionRed can be easily expressed and detected in a wide range of organisms. Mammalian cells transiently transfected with FusionRed expression vectors produce bright fluorescence in 10-12 hours after transfection. FusionRed performance in fusions has been demonstrated in a number of models.


FusionRed use for protein labeling in mammalian cells: 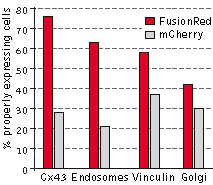 The performance of FusionRed and mCherry was directly compared in HeLa CCL2 cells for the following targets: connexin-43, endosomes, vinculin, and the Golgi complex. In this experiment, the cells were transfected with each of the four target fusions, fixed, and then compared for localization efficiency, which was determined by calculating the percentage of properly expressing cells versus the total number of transfected cells. FusionRed demonstrated clear advantage in all four fusions. Data from Shemiakina et al., 2012 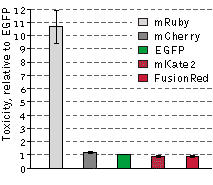 The cytotoxicity of FusionRed relative to selected red fluorescent proteins and EGFP was evaluated in the following experiment: HeLa cells were transfected with appropriate vectors encoding EGFP or one of the following red fluorescent proteins: mRuby, FusionRed, mKate2 or mCherry. Next, the EGFP-expressing cells were mixed with those expressing one of the RFPs, resulting in 4 separate cell mixtures: EGFP and mRuby, EGFP and FusionRed, EGFP and mKate2, and EGFP and mCherry. 48 hours after transfection, the green-to-red cell ratios were calculated utilizing flow cytometry and each of the cell mixtures were then plated into 3 plates. After additional 92 hour incubation, the green-to-red cell ratios were recalculated. Because only living cells were counted for this experiment, the difference between the ratios before and after the incubation can be assumed to accurately reflect RFP toxicity versus EGFP. mRuby exhibited a more than 10-fold higher cytotoxicity level compared to EGFP, while the remaining RFPs were almost as cytotoxic as EGFP in this experiment. Data from Shemiakina et al., 2012

The eye formation is a complex multistage process that depends on many mechanisms, any disturbance of which may result in an abnormal phenotype. Here eye development was used as a sensitive readout of possible abnormal course of embryogenesis caused by expression of EGFP, FusionRed, and mCherry fusions. In these experiments, actin and vimentin fusions of EGFP and FusionRed were only slightly more toxic than the uninjected controls, while expression of mCherry fusions led to notable decrease of the average eye size. Moreover, in many cases (80% of tadpoles with the reduced eye size), the reduced eye phenotype was accompanied by varying degree of an unclosed optic fissure, indicating an abnormal eye development. 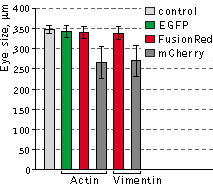 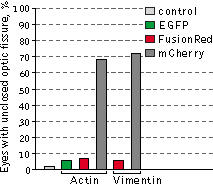 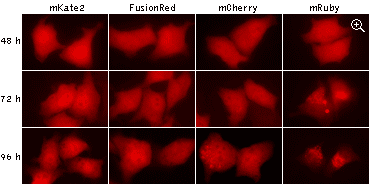 The excellent suitability of FusionRed for long-term experiments was proven both in experiments with stably transfected cell lines and in transgenic animals. In addition to its low cytotoxicity, FusionRed does not show abnormal lysosomal localization typical for many fluorescent proteins in long-term expression.
Being expressed in HeLa cells, both mKate2 and FusionRed remain evenly localized in cytoplasm after 96 hours of cultivation, while mCherry and mRuby show abnormal lysosomal localization.