Cross-reactivity in ChIP is no longer a problem:
What means SNAP-ChIP® certified? – High specificity and efficiency!

Our partner EpiCypher has embarked on a massive effort to identify ChIP-capable reagents that show application-specific specificity and efficient target recovery. After testing over 200 antibodies inSNAP-ChIP® only the highest quality antibodies are recommended for ChIP studies.

SNAP-ChIP® certified antibodies must recover at least 5% of the target PTM after immunoprecipitation. Unlike sample chromatin where target PTM abundance is inferred by genomic loci controls (e.g. euchromatin vs. heterochromatin regions), a major advantage of SNAP-ChIP is that the amount of target PTM input can be precisely defined by examining the spike-in barcoded nucleosomes. By quantifying the amount of target remaining after immunoprecipitation relative to what was added in the input, the percent of target recovered (antibody efficiency) can be calculated. Antibodies with higher efficiencies are desirable since they can be expected to recover higher levels of the target PTM in the sample chromatin, resulting in higher signal and more reproducible ChIP data.

SNAP-ChIP® as a tool for antibody validation 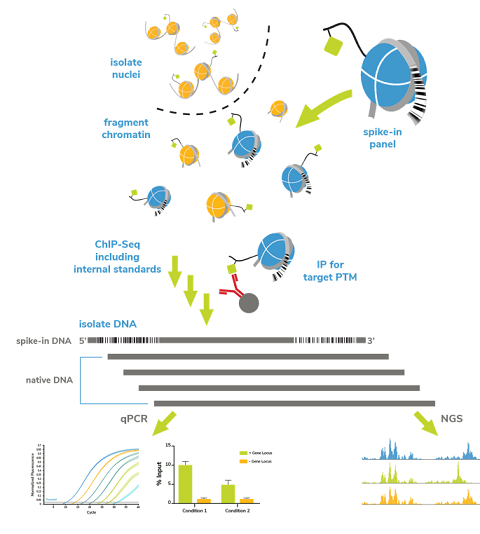 EpiCypher recently tested the performance of 54 ostensible "ChIP-grade" commercial antibodies to H3K4 methylstates using both peptide array and SNAP-ChIP®
(Shah RN et al. (2018) Examining the Roles of H3K4 Methylation States with Systematically Characterized Antibodies. Molecular Cell 72: 162-177).
SNAP-ChIP® data is shown in the heatmap figure below. However, antibody specificity in peptide arrays had no predictive ability for specificity in ChIP. This is rather disquieting since various peptide array formats serve as the gold standard in antibody validation, but likely explains why so many incapable reagents have entered the market. Another key finding of this work is that the most commonly used H3K4me3 antibodies, including those used to generate many ENCODE datasets, are highly cross-reactive to H3K4me2 in SNAP-ChIP® (see heatmap below). This means that many genomic areas reported as containing H3K4me3 are actually a result of a contaminating H3K4me2 signal. 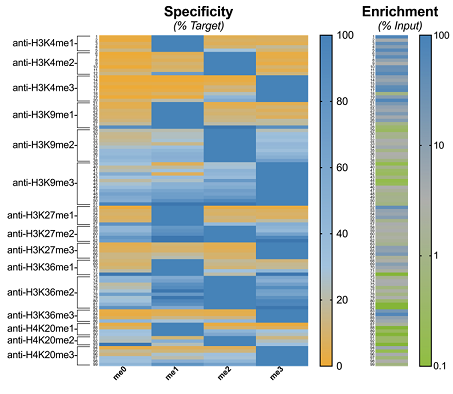 Using the same approach, EpiCypher was able to identify highly specific antibodies for each H3K9, H3K27, and H3K36 methyl states.

If you do not find the SNAP-ChIP verified antibody you need, please contact us for a SNAP-ChIP antibody verification service.
Related Links