TagGFP2 (scientific name mTagGFP) is the improved variant of TagGFP, the mutant of the Aequorea macrodactyla GFP-like protein [Xia et al., 2002, Subach et al., 2008]. TagGFP2 possesses bright green fluorescence with excitation/emission maxima at 483 and 506 nm, respectively. TagGFP2 matures 1,6-fold faster than TagGFP and is characterized by the improved performance in fusions. Compared to EGFP, TagGFP2 provides about the same brightness of fluorescence but is significantly more photostable. TagGFP2 is specially optimized for expression
at 37°C.
Because of monomeric nature, TagGFP2 is mainly intended for protein localization studies and expression in long-term cell cultures. In FRET applications, TagGFP2 can be used as a donor for red fluorescent protein TagRFP or as an acceptor for blue fluorescent protein TagBFP.

Performance and Use of TagGFP2
TagGFP2 can be easily expressed and detected in a wide range of organisms. Mammalian cells transiently transfected with TagGFP2 expression vectors give bright fluorescent signals within 10-12 hrs after transfection. No cell toxic effects and visible protein aggregation are observed.
TagGFP2 performance in fusions has been demonstrated in the beta-actin, alpha-tubulin and mitochondria-targeting signal models. It can be used in multicolor labeling applications with cyan, yellow, red, and far-red fluorescent dyes. 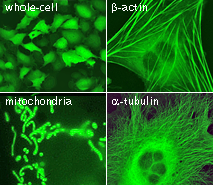 Performance and Use of TurboGFP
TurboGFP can be expressed and detected in a wide range of organisms including cold-blooded animals. Mammalian cells transiently transfected with TurboGFP expression vectors give bright fluorescent signals in 8-10 hrs after transfection. No cytotoxic effects or visible protein aggregation are observed. TurboGFP can be used in multicolor labeling applications with blue, true-yellow, red, and far-red fluorescent dyes. 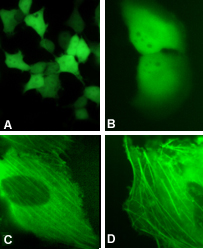