• Rapid complete spin column procedure - Sequentially isolate total RNA and genomic DNA from a single sample in less than 30 minutes
• No phenoll extractions
• Reduce variability - RNA and DNA are isolated from a single sample with no splitting of the lysate, thus reducing inconsistent results and variability
• Isolate from small samples as well as hard-to-obtain samples such as biopsy material or single foci from cell cultures.
• Proteinase K provided for hard-to-extract samples like fibrous tissues.
• Isolate a diversity of RNA species, from large mRNA down to microRNA
• Concentrated RNA and DNA - Both RNA and DNA fractions can be eluted in as little as 20 µL
• Isolate high quality RNA and DNA - The purified RNA and DNA are of the highest quality and can be used in a number of downstream applications

Norgen’s RNA/DNA Purification Micro Kit provides a rapid method for the isolation and purification of total RNA and genomic DNA sequentially from a single sample of cultured animal cells, tissue samples (particularly hard-to-extract fibrous tissues) or blood. The total RNA and genomic DNA are both column purified in less than 30 minutes. The purified RNA and DNA fractions can be eluted in as little as 20 µL. This kit is ideal for researchers who are interested in studying the genome and transcriptome of a single sample, such as for studies of microRNA profiling, gene expression including gene silencing experiments or mRNA knockdowns, studies involving biomarker discovery, and for characterization of cultured cell lines. Norgen’s RNA/DNA Purification Micro Kit is especially useful for researchers who are isolating macromolecules from precious, difficult to obtain or small samples such as biopsy materials or single foci from cell cultures, as it eliminates the need to fractionate the sample. Furthermore, analysis will be more reliable since the RNA and DNA are derived from the same sample, thereby eliminating inconsistent results.

Purification is based on spin column chromatography. The process involves first lysing the cells or tissue of interest with the provided Lysis Solution. For hard-to-extract fibrous tissues (such as heart and muscle), an additional Proteinase K digestion step is provided for maximum recovery of the RNA and DNA. The DNA in the lysate is then captured and purified on a gDNA Purification Micro Column (BIND 1, WASH 1, ELUTE 1) . Ethanol is then added to the flowthrough of the DNA purification step, and the solution is loaded onto an RNA Purification Micro Column. Norgen’s resin binds nucleic acids in a manner that depends on ionic concentrations, thus only the RNA will bind to the column while the proteins are removed in the flowthrough (BIND 2). Next, the bound RNA is washed with the provided RNA Wash Solution to remove impurities (WASH 2), and the purified RNA is eluted with the RNA Elution Solution (ELUTE 2). The kit purifies all sizes of RNA, from large mRNA and ribosomal RNA down to microRNA (miRNA) and small interfering RNA (siRNA).

Both RNA and DNA fractions can be eluted in as little as 20 µL, resulting in a higher concentration of nucleic acids. The purified RNA is of the highest integrity and can be used in a number of downstream applications including real time PCR, reverse transcription PCR, Northern blotting, RNase protection and primer extension, and expression array assays. The genomic DNA is of the highest quality, and can be used in PCR reactions, sequencing, Southern blotting, methylation studies and SNP analysis. 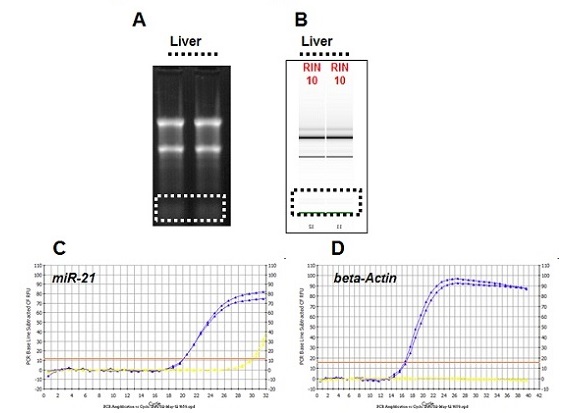