• Rapid and efficient spin column procedure - Isolate total RNA and total proteins from a single sample in less than 30 minutes
• Sequentially isolate and purify high quality total RNA and total proteins from a single sample
• Efficient non-enzymatic removal of gDNA
• Ideal for small or difficult to obtain samples
• No need to split the lysate, or to use phenol or precipitation methods
• Purify RNA/Protein from cultured animal cells, tissues, blood, bacteria, yeast, fungi or plants
• Complete column purification
• Reduce variability - RNA and proteins are isolated from a single sample with no splitting of the lysate, thus reducing inconsistent results and variability
• Isolate a diversity of RNA species, from large mRNA down to microRNA

Norgen’s RNA/Protein Purification Plus Kit provides a rapid method for the isolation and purification of total RNA (including small RNA and microRNAs) and proteins sequentially from a single sample of cultured animal cells, small tissue samples, blood, bacteria, yeast, fungi or plants. The total RNA and proteins are all column purified in less than 30 minutes. This kit is ideal for researchers who are interested in studying the transcriptome and proteome of a single sample, such as for studies of microRNA profiling, gene expression including gene silencing experiments or mRNA knockdowns, studies involving biomarker discovery, and for characterization of cultured cell lines. Norgen’s RNA/Protein Purification Plus Kit is especially useful for researchers who are isolating macromolecules from precious, difficult to obtain or small samples such as biopsy materials or single foci from cell cultures, as it eliminates the need to fractionate the sample. Furthermore, analysis will be more reliable since the RNAand proteins are derived from the same sample, thereby eliminating inconsistent results. The purified macromolecules are of the highest purity and can be used in a number of different downstream applications.

Purification is based on spin column chromatography. Briefly, the process involves first lysing the cells or tissue of interest with the provided Lysis Solution. The DNA is then captured and eliminated on a genomic DNA Removal Column. Ethanol is then added to the flowthrough of the DNA elimination step, and the solution is loaded onto a RNA/Protein Purification Column. Total RNA, including microRNAs, will bind to the column while the proteins are removed in the flowthrough (BIND 1). The bound RNA is then washed with the provided RNA Wash Solution to remove any impurities, (WASH 1), and the purified RNA is eluted using the RNA Elution Solution (ELUTE 1). The kit purifies all sizes of RNA, from large mRNA and ribosomal RNA down to microRNA (miRNA) and small interfering RNA (siRNA).

The proteins that are present from the RNA binding flowthrough can now be loaded directly onto an SDS-PAGE gel for visual analysis. Alternatively, the protein samples can be further purified using the same RNA/Protein Purification Column. After all the RNA has been eluted from the column, the flowthrough is pH adjusted and loaded back onto the column in order to bind the proteins that are present (BIND 2). The bound proteins are washed with the provided wash buffer (WASH 2), and are then eluted such that they can be used in downstream applications (ELUTE 2).

The purified RNA and proteins are of the highest integrity and can be used in a number of downstream applications. 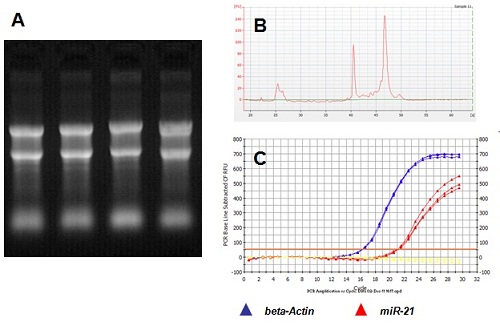 High Quality Total Proteins Eluted in Mass Spec-Compatible Buffer. Norgen’s RNA/Protein Purification Plus Kit provides a column purification step for effective concentration and clean-up of the isolated proteins. The proteins are eluted into a buffer which is compatible with many downstream applications including mass spectrometry as well as standard protein quantification methods (including Bradford assays). In contrast, most competing multiple analyte isolation products require protein precipitation and the precipitated proteins are required to be resuspended in buffer with high-detergent content (such as SDS-PAGE loading dye) for full recovery. In this figure, the protein fraction isolated from hamster liver using Norgen’s RNA/Protein Purification Plus Kit was resolved direclty on a 12% SDS-PAGE protein gel. Norgen’s RNA/Protein Purification Plus Kit purified the proteins by column and the eluted proteins are already in buffer compatible with downstream applications.