Stellaris RNA FISH (fluorescence in situ hybridization) is a RNA visualization method developed by our partner LGC Biosearch Technologies that allows for simultaneous detection, localization and quantification of individual RNA molecules at the cellular level in fixed samples using fluorescence microscopy. A set of Stellaris RNA FISH Probes is comprised of a pool of up to 48 unique probes, each labeled with a fluorophore, that collectively bind along an RNA target transcript to produce a diffraction limited spot.

Unsurpassed Simplicity and Sensitivity – Never before has it been so simple and straightforward to quantify mRNA using FISH. Count single molecules using fluorescence microscopy!

Advanced Tool for Research – Stellaris FISH Probes give you the ability to detect single molecules of your target mRNA in situ, giving you the potential to transform research in cancer, stem cell research, neuroscience, developmental biology, pathology, and more.


The Stellaris RNA FISH Method
The Stellaris FISH method is a much improved and simplified FISH technology that requires no probe preparation and can be performed in four easy steps:

Step 1: Prepare Sample
A sample is grown, adhered, or sectioned onto a #1 cover glass and permeabilized with alcohol. No protease required!
Note: Variations in sample preparation between different organisms and sample types are covered in the Stellaris Protocols

Step 2: Hybridize Probes
Hybridization can be completed in 4 to 16 hours at +37 °C in a standard laboratory incubator.

Step 3: Wash Sample
Removal of hybridization buffer and addition of wash buffers with short incubation periods are able to remove excess probes. The total time for this step is 1 – 1.5 hours.

Step 4: Image Sample
The sample is ready for imaging using a standard fluorescence microscope. We recommend using a wide-field fluorescence microscope though other imaging platforms can be used with Stellaris RNA FISH probes. Image processing is done using available online tools which convert Z stack images to a maximum intensity projection image. Single molecules of mRNA can be seen as individual diffraction-limited spots.

Sensitivity & Specificity
The large number of probes in a Stellaris RNA FISH assay ensures both high sensitivity and specificity. The inherent redundancies of this direct detection method minimize the possibility of false negative and false positive signals. Positive signals are identified from the combined localized fluorescence of multiple probes. Off-target binding of single probes generates only weak and diffuse fluorescence, which falls well below the threshold for detection of the targeted mRNAs. The short probe lengths are able to easily penetrate the cellular matrix for efficient hybridization.

Stellaris Dyes & Multiplexing
Stellaris RNA FISH probes are available in a wide variety of fluorophores in the visible spectrum, including LGC Biosearch’s CAL Fluor and Quasar dyes (CAL Fluor® Orange 560, Quasar® 570, CAL Fluor® Red 590, CAL Fluor® Red 610, CAL Fluor® Red 635, Quasar® 670) and can be used in a multiplex assay. The dye choices in a multiplex assay are largely determined by the filters available on the imaging platform, but it is certainly possible to design an assay including a DAPI nuclear stain and three Stellaris RNA FISH probe sets labeled with reporter dyes with minimal spectral overlap. See the Stellaris Dyes and Modifications page for detailed information on all available dyes and modifications as well as a multiplexing guide. 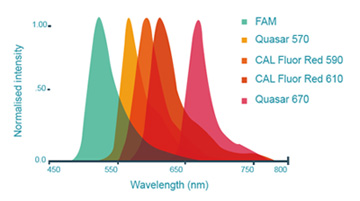 Please note that due to variable auto-fluorescence in the green channel inherent to cells and tissue, we do not recommend use of FAM for some Stellaris RNA FISH applications. We recommend testing your sample for green channel autofluorescence before ordering FAM labeled sets or ordering an alternative dye that is compatible with your experiment.

RNA FISH Buffers
Stellaris Buffers are ideal for performing Stellaris RNA FISH on cells and tissue, as well as other sample types. The buffers contain proprietary additives to enhance signal and reduce background in assays that may typically exhibit more pronounced background fluorescence.