The genome is pervasively transcribed and large portion of the transcripts do not code for any proteins. These transcripts were initially thought to be junk but recent evidences suggest that these RNAs have regulatory potential. The potential functions of regulatory RNAs are now being explored as key layers of genome biology. Aberrant expression of these RNAs has been linked to cancer and other diseases. The RNAs holds promise in the areas of identifying novel therapies and for understanding complex cellular network signaling pathways. Very recently scientists have found that enhancers are also actively transcribed and these RNAs are known as enhancer RNAs (eRNAs). Several eRNAs have been shown to have significant regulatory function in development and diseases. Our Partner SBI has developed a regulatory RNA qPCR profiler that contains validated assays for the top regulatory RNAs involved in Cancer and Stem Cells. See lnk above. 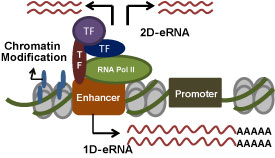 Enhancer RNAs (eRNAs) are short RNA sequences that are transcribed from active enhancer regions of the genome. Active enhancers are marked by high levels of H3K4me1 and H3K4me2 relative to the H3K4me3. There are two types of eRNA, 1D eRNAs and 2D eRNAs. 1D eRNAs are uni-directional RNAs that are polyadenylated but not capped and 2D eRNAs are bidirectional and capped. eRNAs range in size from 50 to 2000 nt in length and have been identified in all cell types and has been shown to have very significant regulatory function in development and disease. An example of how 1-D and 2-D eRNAs influence transcription control is diagrammed above.
LncRNAs are long non-coding RNAs that are more than 200 bp long and have a cap and a polyA tail. Some lncRNAs are known to affect specific genes by either activating them or inhibiting them. One example is activating non-coding RNAs (ncRNA-a), which are a type of LncRNA with enhancer-like function.

Our partner SBI has developed a regulatory RNA qPCR profiler that contains assays for the top 89 RNAs that have been shown to have regulatory functions. See link above.