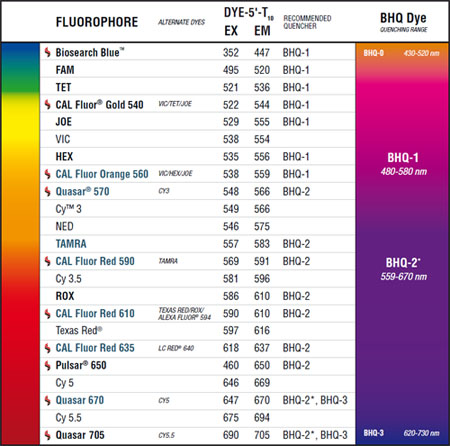 This chart is intended to guide you through the dye selection process for your oligonucleotide. A fluorophore and quencher combination may be selected for applications such as probe-based qPCR.
Fluorophores in BLUE are available for Stellaris RNA FISH.
Dyes in BOLDFACE are available modifications for labeled oligos.
*BHQ-2 dye is recommended for Quasar 670 and Quasar 705 fluorophores due to static quenching.
Many dyes are also available in at least one of the following forms: labeled oligos, amidites, controlled pore glass, synthesis columns, carboxylic acids, succinimidyl esters, and amine labels.

The CAL Fluor dye series consists of novel xanthene dyes developed for the purpose of modifying synthetic DNA. The dyes‘ spacer arm attachment eliminates problems such as multiple isomers and low synthesis yields, commonly associated with other xanthene dyes. CAL Fluor dyes are compatible with all probe/primer formats , and are available as phosphoramidites and CPGs, carboxylic acids and succinimidyl esters.
They enable automated probe synthesis as they do not require cumbersome post DNA synthesis labeling such as the manual methods of succinimidyl ester coupling.
When tethered together through a DNA strand with a BHQ dye, the fluorescence of the CAL Fluor dye is cloaked until a specific analyte is encountered.
Dual-labeled probes incorporating CAL Fluor dyes coupled with a BHQ dye exhibit large signal-to-noise values and produce amplification traces with robust deltaRns and earlier CT values.
CAL Fluor dyes have been proven to perform 3-plex, 4-plex, and even 5-plex qPCR on most popular real-time PCR thermal cyclers, see ‘Multiplexing Recommendations‘ table (link below).

The Quasar dyes were developed by Biosearch as replacements for the Cy dyes. With emission values ranging from 570 nm to 705 nm, the Quasar dyes increase fluorophore choices and help to eliminate potential cross-talk problems associated with multiplex qPCR.
These vibrant dyes are compatible with popular probe and primer formats, and are available as phosphoramidites, CPGs, carboxylic acids, and succinimidyl esters.
The advanced Quasar dyes have been slightly modified with non-reactive groups, making them less soluble than Cy dyes. When tethered to a dual-labeled probe terminated with a BHQ dye, the Quasar dyes’ hydrophobic character promotes static quenching, which produces better signal-to-noise ratios and a higher performing probe.
Meant to perfectly complement to Biosearch’s BHQ dyes, the Quasar dyes are exceptional fluorophore candidates for multiplex qPCR. Proven to perform 3-plex, 4-plex, and even 5-plex qPCR, the Quasar dye series matches the optics of most popular thermal cyclers, making these dyes an essential component of multiplexed qPCR assays, see ‘Multiplexing Recommendations‘ table (link below).

The BHQ family of quenchers was developed to provide excellent spectral overlap over the entire range of commonly used reporter dyes, see ‘Dye Selection Chart‘ above. The BHQ dyes cover the spectrum from 430 nm into the near IR making it possible to utilize reporter dyes that emit anywhere in this range and thereby increasing the flexibility of FRET assays. Because BHQ dyes have no fluorescence of their own, background problems do not exist and the signal-to-noise ratios are increased. With the BHQ dyes, fluorescence is not seen until a hybridization event occurs, giving you confidence in your results.
Biosearch can incorporate BHQ dyes into almost any probe/ primer formulation, including dual-labeled TaqMan and Molecular Beacon probes as well as Black Hole Scorpion and Plexor primer systems. In addition, functionalized BHQ dyes for internal modifications are also available.Related Links