The ExProfile™ Gene qPCR Arrays from GeneCopoeia are designed for profiling the expression of pre-made or customized sets of coding-genes in various tissues or cells. The resulting differential expressions of profiled genes help researchers to identify those that are biologically significant and relevant to their research. In each 96-well plate, there are up to 84 pairs of qPCR primers and 12 wells of controls which are used to monitor the efficiency of the entire experimental process – from reverse transcription to qPCR reaction.
Each pair of primers used in the qPCR arrays has been experimentally validated to yield a single dissociation curve peak and to generate a single amplification of the correct size for the targeted mRNA. A cDNA pool, containing reverse transcript products from total RNA of 10 different tissues, was used as the qPCR validation template.
A universal real-time PCR condition was developed for easy profiling and analysis of the gene expression in a high-throughput fashion. The All-in-One™ First-Strand cDNA Synthesis Kits and qPCR Mix Kits are the recommended and supported RT-PCR reagents for use with the ExProfile™ gene qPCR arrays. These reagents have been optimized to produce high sensitivity, efficiency, and specificity.

Important Note:
Before placing an order please take care to choose the right kit version which is compatible with your qPCR instrument (see table below)!

Positive calls with a range of total RNA 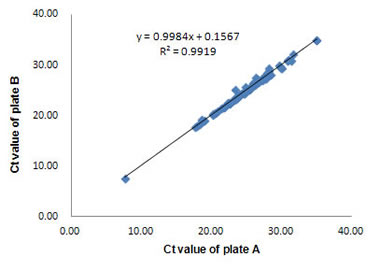