Accuracy through circularization
RealSeq® is a novel method for preparing small-RNA sequencing libraries that nearly eliminates incorporation bias in Next-Generation-Sequencing (NSG). This technology solves the problem of commonly used sequencing library preparations that lead to underdetection of many miRNAs, some by as much as 10,000-fold.

Under-representation in sequencing libraries can obscure the presence of some RNAs, including potential biomarkers. Accurate quantification of microRNAs (miRNA) and other small RNAs is important for understanding their biology and for developing new biomarkers and therapeutic targets.

Most bias stems from sequence-dependent variability in the enzymatic ligation reactions that attach the two adapters to the 3’ and 5’ ends of the miRNAs /small RNAs during preparation of sequencing libraries. By using a novel single adapter and circularization, RealSeq® greatly reduces library preparation bias. 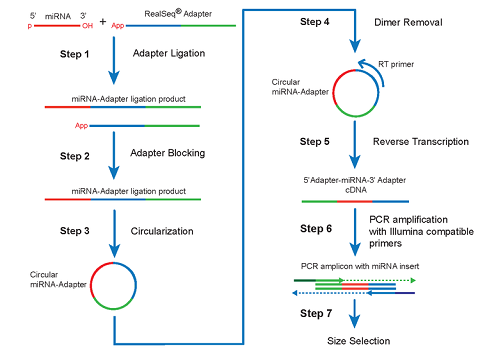 3´ ends of miRNAs or any other 5’-p and 3’-OH small RNAs are ligated to RealSeq® adapters which contain standard adapter sequences (shown in blue and green) that are compatible with Illumina/Solexa sequencing.

Unligated adapters are blocked before circularization of the miRNA-adapter product and then removed. This intramolecular ligation is significantly more efficient than intermolecular ligation of 5’-adapters in standard two-adapter ligation schemes. 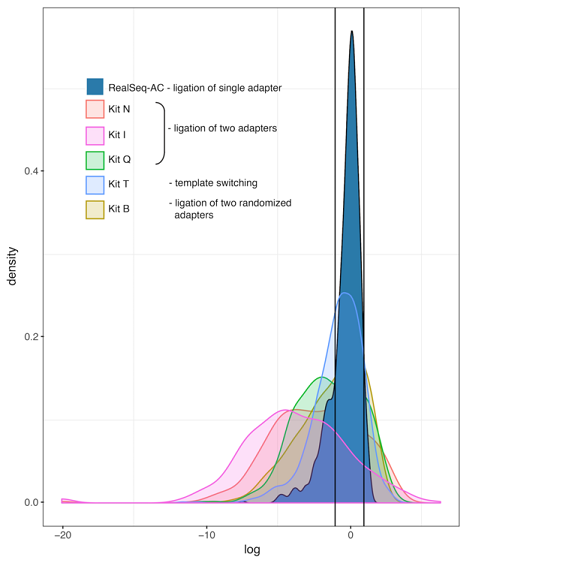 One pmole of miRXPlore Universal Reference pool (Miltenyi Biotec) was used to compare incorporation bias in six different library preparation kits. Purified libraries were sequenced on the Illumina MiSeq platform. Trimmed sequencing reads were aligned to a custom miRNA reference. Reads mapping to miRNAs were counted and fold-deviations from the equimolar input were calculated and plotted as log2 values. Measurements of miRNA levels within a factor of two of the expected values (between vertical lines) are considered unbiased (Fuchs et al, 2015). The method of adapter attachment to the miRNAs is noted in the legend. Libraries prepared using RealSeq®-AC have substantially fewer miRNAs with bias than the ones prepared using any of five other commercially available library preparation kits.

Sequencing results obtained from commercially available library preparation kits were compared using 200-ul aliquots from the same plasma samples. Short reads are classified as reads <15 nt length after adapter trimming. Reads passing this filter are then aligned to a reference file with all human miRNAs (miRBase 21, orange), and the remaining reads are aligned to the human genome (hg19, red).

RealSeq® - biofluids yields significantly fewer short or unmappable reads (grey) than the other two commercial libraries available that are indicated for biofluids analysis.

The number of sequenced miRNAs and of other mappable small RNAs is substantially higher.

Comparison of miRNAs read frequencies of three different library preparation kits (gel-free protocols) from 200 ul plasma samples. Reads were subsampled to 10 million reads per kit and aligned to a reference that includes all human miRNAs listed in miRBase 21 (Miltenyi Biotec). The number of miRNAs detected at different coverage for each library preparation kit is shown.