Long noncoding RNAs (LncRNAs) are emerging as master regulators of embryonic pluripotency, differentiation, patterning of the body axis and promoting developmental transitions. LncRNAs are larger than 200 nucleotides in length and are pervasively expressed across the genome. LncRNAs function as molecular scaffolds regulating histone modifications and influence the epigenetic programs of the transcriptome. Dysregulated expression of lncRNAs has been shown to be associated with a broad range of defects in development and diseases. Studying the expression patterns of lncRNAs will be a crucial method for understanding the roles they play in many model systems.

To date, lncRNAs have been found to exhibit a wide range of functions ranging from signaling, serving as molecular decoys, guiding ribonulceoprotein complexes to specific chromatin sites and also participating as scaffolds in the formation of complexes. 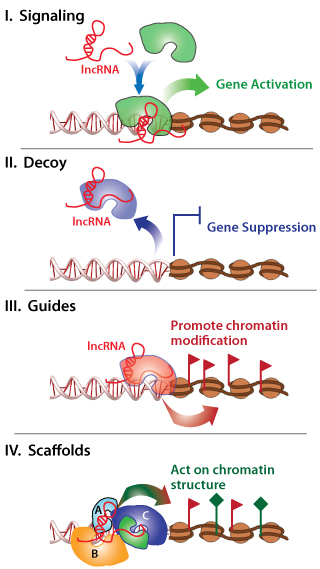 
I. Signaling
The transcription of certain lncRNAs is very tissue and temporal specific. Their expression can be in response to certain stimuli, such as cellular stress and temperature. Thus, lncRNAs can serve as molecular signals and can act as markers of functionally significant biological events.

II. Decoys
The molecular decoy type of activity takes place when specific lncRNAs are transcribed and then bind to and titrate away protein factors. Decoy lncRNAs can "sponge" protein factors such as transcription factors and chromatin modifiers. This leads to broad changes in the cell´s transcriptome.

III. Guides
LncRNAs can be molecular guides by localizing particular ribonucleoprotein complexes to specific chromatin targets. This activity can cause changes in gene expression either in cis (on neighboring genes) or in trans (distantly located genes) that cannot be easily predicted by just the lncRNA sequence itself.

IV. Scaffolds
Assembly of complex protein complexes can be supported by lncRNAs, linking factors to together to form new functions. Some lncRNAs possesses different domains that bind distinct protein factors that altogether, may impact transcriptional activation or repression.

LncRNAs participate in a wide variety of biological processes 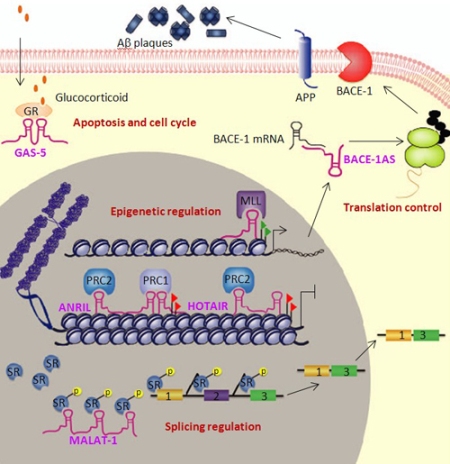