• Complete system to simplify your CRISPR/TALEN validation and edited clone screening
• Robust amplification for the target site PCR. No genomic DNA isolation is required
• Easy to use T7 endonuclease I assay with optimized conditions and positive control

GeneCopoeia´s IndelCheck™ CRISPR/TALEN insertion or deletion detection system consists of the Target site PCR Kit V2.0 and the T7 Endonuclease I Assay Kit, which are both also available as separate kits:

For amplification of targeted genomic regions from cell lysates without genomic DNA isolation. Now in Version 2.0, the Target Site PCR kit contains buffer, SuperHeRo™ DNA polymerase, and nucleotides together in one mix for greater convenience. 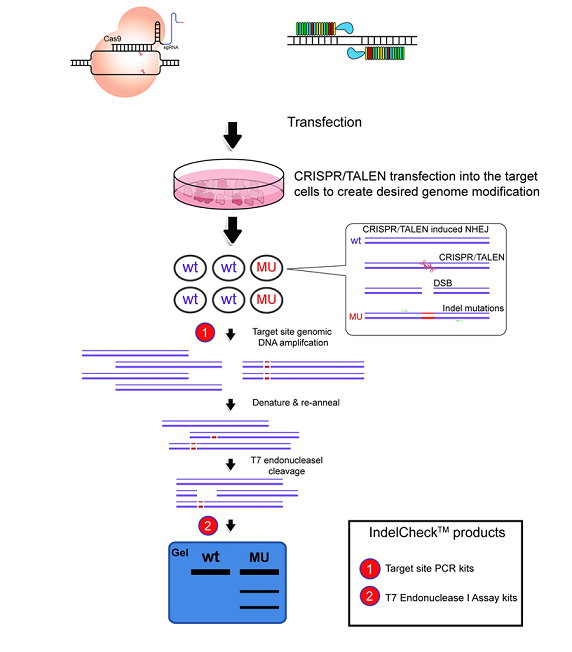 Figure 1. CRISPR or TALEN functional validation using the IndelCheck™ system. Cells transfected with CRISPR or TALEN plasmids are harvested in bulk, followed by generation of a PCR product using primers flanking the target site with the Target site PCR kits (1). The PCR product is denatured, followed by re-annealing, leading to a population of double strand fragments, some of which contain mismatches. These mismatches are detected by the T7 endonuclease I Assay kit (2). If CRISPR or TALEN are active in the cell, then cleavage products will be visible on an agarose gel.