GeneCopoeia offers standard or customized donor cloning vectors for Homology-directed repair (HDR)-mediated applications.
A wide range of donor vector backbones, promoters, markers, and other useful elements are available to suit your experimental needs, such as: 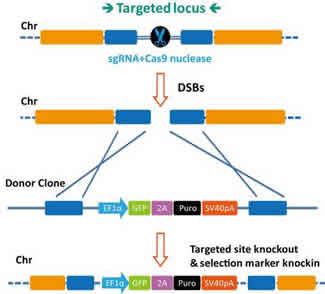 
HR Targeting Vectors from SBI
can increase the efficiency of gene knock-outs, and are essential for gene knock-ins, edits, and fusions, with features that can make it easier to find successful clones, minimize the amount of vector DNA left in the genome, minimize off-target integration, and more.

Genomic Knock-outs
For HR-based applications needing the disruption of a particular protein-coding or non-coding gene of interest, a gene-knockout targeting vector would be desirable. This vector would include homology arms (0.5kb-1kb in length) at the 5´ and 3´ regions immediately flanking the DNA sequence of interest (e.g. exonic sequence) to specifically direct the targeting vector to insert an expression cassette where the targeted sequence lies, leading to the ´knock-out´ of the sequence by gene addition. SBI´s gene knockout targeting vectors (Cat #HR110PA-1 and #HR210PA-1) are designed to be vectors of choice for this application. Gene-specific homology arms can be cloned into MCS1 and MCS2 to direct ZFN, TALEN or Cas9-mediated gene disruption. Correctly disrupted cell lines are selected as RFP-positive (GFP for HR210PA-1) and puromycin-resistant colonies. The selection cassettse are flanked by LoxP sites and thus can be removed using a transient expression of Cre recombinase (not included).

Sample data
The dual positive selection markers, RFP and Puromycin resistance genes have been functionally validated in human HEK293T cells. Cells become RFP and puromycin-resistant 48 hours after initial transfection. The EF1a promoter is a robust promoter that is active most cell types, including primary and stem cells. An example of targeting by the HR110PA-1 targeting vector is shown to the right.

To ensure that integration of the HR expression cassette will not be inactivated by epigenetic modifications or influenced by neighboring sequences, insulator sequences are implemented in HR vectors. Cells with successful HR events show prolonged RFP-positivity and persistent puromycin-resistant for more than 3 months in culture In addition, the selection cassette is fully removable by expression of Cre recombinase (not included) via the built-in LoxP sites. 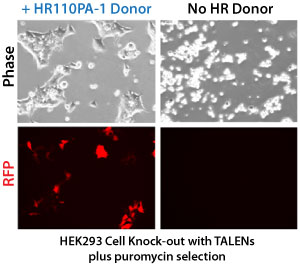 Genomic Knock-ins
For targeted insertion of any expression cassette into a specific location in the genome, such as a "safe harbor" locus (Sadelain et al. 2011) for stable expression with minimal context-dependent effects, an HR vector containing homology arms at 5´ and 3´ ends with an expression cassette between the homology arms would be desirable. This strategy will require co-transfection of ZFN, TALEN or Cas9 plasmids with the knock-in targeting vector into a safe harbor locus (e.g. human AAVS1 or mouse Rosa26). SBI´s gene knock-in targeting vector (Cat #HR100PA-1-SBI) is designed to be the vector of choice for this application.

Monitor endogenous expression activity with gene tagging
Tag an endogenous sequence of interest with a marker to create a fusion or to co-express a marker tag with the endogenous sequence for various applications (e.g. tracking spatial dynamics of a protein, lineage tracking, etc.) with HR-tagging vectors. SBI provides a collection of four tagging and co-expression vectors for HR-based applications. Any type of DNA sequence, from protein-coding ORFs to non-coding sequences can be efficiently tagged or co-expressed with GFP and/or luciferase using these vectors. For protein-coding genes, the 3´ end (typically the last exon) can be targeted using these vectors for efficient generation of C-terminal fusion tagged proteins or co-expression of the gene and the tag via T2A or IRES elements.

The HR120PA-1 targeting vector is designed to direct the in-frame fusion of GFP to the 3´ end of your gene of choice. The 5´ homology arm/GFP fusion segment is created using seamless fusion cloning technologies (e.g. SBI´s Cold Fusion Kit) at the provided EcoRI site. The 3´ homology arm can be cloned into the MCS using Cold Fusion cloning or traditional cloning using the provided restriction sites. An example of utilizing the HR120PA-1 vector to generate a C-terminal GFP fusion construct is illustrated above. Additionally, the EF1a-RFP-T2A-Puro cassette can be excised by transient expression of Cre recombinase, leaving only the GFP fusion protein and a single LoxP site.

The HR130PA-1 vector is designed to direct the T2A-peptide/GFP linkage to the 3´ end of your gene of choice. This vector can be used in cases where a GFP fusion in-frame with the target gene may affect the function of the endogenous gene of interest. The 5´ homology arm/T2A-GFP linkage segment is created using seamless fusion cloning technologies (e.g. SBI´s Cold Fusion Kit) at the provided EcoRI site. The 3´ homology arm can be cloned into the MCS using Cold Fusion or by traditional cloning using the provided restriction sites. The EF1a-RFP-T2A-Puro cassette can be excised by expression of Cre recombinase, leaving only the GOI-T2A-GFP construct and a single LoxP site.

Gene tagging with dual GFP and Luciferase markers
The HR150PA-1 vector is designed to direct the in-frame fusion of GFP-T2A-Luciferase to the 3´ end of your gene of your choice. The gene of interest will be fused to GFP and will express luciferase as a separate protein for applications where quantitative measurement of endogenous gene expression is desired. The 5´ homology arm/GFP-T2A-Luciferase fusion segment is created using seamless fusion cloning technologies (e.g. SBI´s Cold Fusion Kit) at the provided EcoRI site. The 3´ homology arm can be cloned into the MCS using Cold Fusion or by traditional cloning using the provided restriction sites. The EF1a-RFP-T2A-Puro cassette can be excised by expression of Cre recombinase, leaving only the GFP Fusion-T2A-luciferase construct and a single LoxP site.

IRES-GFP co-expression vectors
The HR180PA-1 vector is designed for coupled expression of the gene of interest to an eGFP marker by the use of an IRES element, which aids in translation of the eGFP protein. This vector is especially useful for monitoring expression of non-coding transcripts (e.g. microRNA, lincRNAs) that are targeted by TALEN or Cas9 systems for functional studies. The 5´ homology arm can be cloned into the vector by traditional restriction enzyme cloning or by fusion cloning methods to the 3´ end of your gene of your choice using the provided restriction sites directly upstream of the IRES element. The 3´ homology arm can be cloned into MCS2 using the same cloning methods. Since the IRES controls the expression of the eGFP, the gene of interest does not have to be in-frame with eGFP and in cases of cDNA inserts, the presence of a stop codon in the sequence does not affect eGFP expression. The EF1a-RFP- T2A-Puro cassette can be excised by expression of Cre recombinase, leaving only the GOI-IRES-eGFP construct and a single LoxP site.

Precisely edit genes on the single nucleotide level
One of the most challenging applications for genome engineering using HR-mediated approaches is gene editing, or the ability to correct a single base (e.g. SNP) in the presence of excess genomic background sequences. While such applications have been demonstrated to correct single basepair mutations, they often leave residual sequences behind such as loxP/FRT sites (van der Weyden et al. 2002) or even selection markers, with potentially unknown effects on transcription of neighboring genetic elements (Meier et al. 2010). The ideal system would be amenable for HR-based correction of the mutation followed by a footprint-free removal of selection cassettes or any recombinase artifacts. Previous work on the piggyBac transposon system, originally derived from baculovirus infecting moths, has demonstrated that it can efficiently act as a transposon to insert and remove transgenes in mammalian cells by specific recognition of inverted terminal repeats flanking the transgene (Lacoste et al. 2010). By exploiting this aspect of the piggyBac system, researchers have designed an HR targeting vector containing piggyBac inverted terminal repeats, in conjunction with ZFNs, to specifically target the A1AT locus in human iPSC cells to correct a single mutation responsible for alpha-1-antitrypsin deficiency in a footprint-free manner (Yusa et al. 2011).

By cloning the homology arms at the 5´ and 3´ end of the cutting site, and one of the homology arms containing the desired correction, this vector can be co-transfected into target cells with ZFN, TALEN, or Cas9 vectors for HR-based placement into the target genome. The existing GFP and Puro positive selection markers driven by a robust EF1a promoter can be used to select for cells that are positive for HR, followed by the use of the SuperPiggybac transposase enzyme (Cat.#PB200PA-1) to remove the selection cassette and any residual elements between the inverted terminal repeat elements flanking the selection cassette. In addition, a hsv-tk negative selection marker is present in the selection cassette to select out any cells that have not excised the cassette when ganciclovir is added to the cells.