Genome Editing using guide RNAs
The recent discovery of the CRISPR/Cas9 complex has provided researchers an invaluable tool to target and modify any genomic sequence with high levels of efficacy and specificity. The system, consisting of an RNA-guided nuclease (Cas9) and guide RNA (gRNA) complementary to a target sequence, allows for sequence-specific cleavage of target loci across the genome.

The type II prokaryotic CRISPR (Clustered Regularly Interspaced Short Palindromic Repeats) system, originally discovered in the bacterium Streptococcus pyogenes, that works as a mechanism to defend against viruses and foreign DNA, has provided a revolutionary tool for targeted genome engineering with simple elegance.

The system uses a nuclease, CRISPR-associated (Cas9), that complexes with small RNAs as guides (gRNAs) to cleave DNA in a sequence-specific manner upstream of the protospacer adjacent motif (PAM) in any genomic location. The CRISPR-Cas9 system is comprised of separate guide RNAs known as the crRNA and tracrRNA. These two separate RNAs have been combined into a single RNA to enable site-specific mammalian genome cutting through the design of a short guide RNA. SBI has built a series of all-in-one CRISPR-Cas9 cloning vectors with different promoter options. These cloning vectors will express a human codon-optimized Cas9 nuclease as well as any gRNA sequence of your choice linked to the tracrRNA. Simply design the gRNA for the genome target DNA sequence and clone into the Cas9 SmartNuclease™ vector for efficient genome engineering. The PrecisionX™ Cas9 SmartNuclease™ Vector products are the subject of pending US and foreign patent applications.


Cas9 SmartNuclease Vectors
To make the RNA-directed Cas9 system more efficient, affordable, and convenient to use, SBI has developed the all-in-one, programmable PrecisionX™ Cas9 SmartNuclease and Nickase expression vectors, including a human codon optimized Cas9 (hspCas9) or Cas9 mutant (Cas9 Nickase) along with a custom guide RNA (gRNA) consisting of a chimeric crRNA-tracrRNA transcript expressed from a single construct. In addition, these vectors are offered either untagged or with built-in fluorescent markers (GFP or RFP) for tracking transfection efficiency into target cells, and also carrying a T7 promoter for in vitro transcription of Cas9 mRNA and gRNA for in vivo applications (e.g. oocyte microinjections). 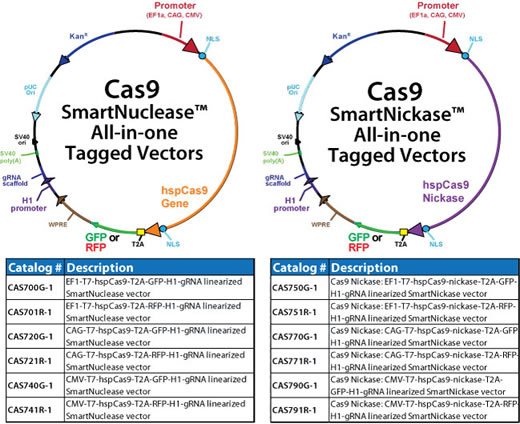 1) The hspCas9 and Nickase used in this system include two nuclear localization signals (NLS) at the N-terminus and C-terminus to ensure efficient import of the hspCas9 protein into the nucleus.
2) The expression vectors also contain a Myc-tag at the N- terminus for ease of detection and purification of the recombinant Cas9 protein.
3) To facilitate diverse applications of the system, hspCas9 and Nickase may be expressed from a number of different commonly utilized promoters that are active in mammalian cells.
4) The hspCas9 and Nickase is followed by a regulatory element called WPRE (Woodchuck virus post-transcriptional regulatory element) to boost gene expression and stabilize the mRNA transcript.

To avoid reconstituting the CRISPR/Cas9 RNA processing machinery, a custom gRNA (crRNA-tracrRNA chimeric transcript) can be generated from the pre-cut, ready-to-use linearized vectors through the use of annealed oligonucleotide duplexes encoding the 20bp target sequence upstream of PAM, with the gRNA expressed under the control of a robust H1 polymerase III promoter. SBI´s programmable, all-in-one vector format allows for highly flexible targeting of any genomic loci in the form of N20NGG.

As recently published in Nature Communications (Ranganathan, et al. 2014) and featured in BioTechniques, the H1 promoter offers significant advantages over using the U6 promoter to express guide RNAs for CRISPR/Cas9 genome engineering. Because the U6 promoter has a strict requirement to initiate transcription with a G residue, using an H1 promoter – which can express RNA starting with any nucleotide – doubles the number of targetable sites available in the genome. Ranganathan and colleagues also demonstrated that the level of expression from H1-promoter driven gRNAs results in lower off-target cutting and increased specificity compared to systems using a U6 promoter for gRNA expression. SBI’s all-in-one CRISPR/Cas9 SmartNuclease plasmids use the H1 promoter for gRNA expression – offering maximum specificity and availability for genome targets. CRISPR/Cas9 H1 promoter all-in-one vectors are only available from SBI!


Cloning gRNA into Cas9 SmartNuclease™ Vectors
The general workflow of the cloning, validation, and transfection of the gRNA/Cas9 expression construct into cells is simple. First, design two DNA oligonucleotides that are sense and antisense sequences of the target DNA which is 20 bp upstream of the Protospacer Adaptor Motif, PAM (5´ - NGG - 3´). Anneal the two oligonucleotides to generate a duplex to clone the duplex directly into the provided linearized CRISPR-Cas9 vector by ligation. Transform into competent cells and grow the clones using LB/Kanamycin. Confirm the correct clones by plasmid construct sequencing. Your Cas9 SmartNuclease construct is now ready ! 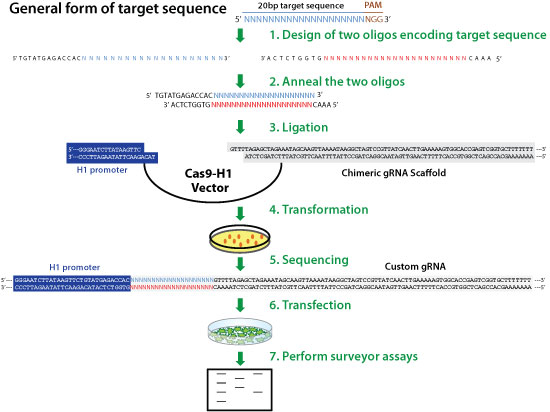 Mutant Cas9 SmartNickase for Paired Nicking
SBI´s SmartNickase all-in-one vector series features an amino acid mutation at position D10A in Cas9 resulting in the inactivation of the nuclease catalytic activity and converting Cas9 to a "nickase" enzyme that makes single-stranded breaks at the target site.
In order to enhance CRISPR Cas9 based genome engineering specificity and avoid potential off targets effects, a pair of gRNA can be used with SmartNickase to generate double nicking with 5´overhang. This also favors homologous recombination at the target site when using HR vectors and lowers the rate of NHEJ (non homologous end joining).


Please follow the guideline below for paired gRNA selection and design. 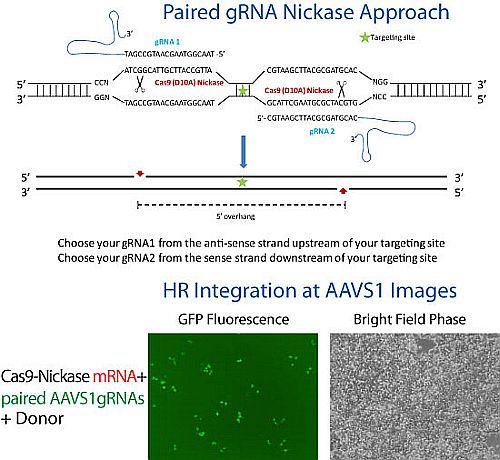