CRISPR-Test Functional Cas9 Activity Assay Kits
Would you like to know if Cas9 is active in your cells? Cellecta’s CRISPR-Test™ assay kits accurately assess Cas9 activity in your cell line using two pre-mixed, lentiviral-packaged vectors:
- one viral mix has a green fluorescent protein (GFP) lentivirus that responds to the specific Cas9 activity measured by the kit, whether nuclease, gene repression or gene activation
- the other prepared lentiviral mix contains a red fluorescent protein (RFP) marker and functions as a control 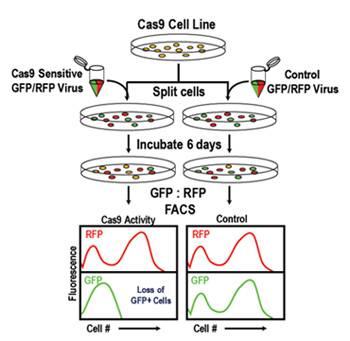 CRISPRtest workflow. A test population of cells is split into two wells. The responsive viral mix is introduced to one of the wells and the control virus to the other. After some days of incubation, cells from both cultures are analyzed by FACS. The ratio of GFP to RFP in the responsive population indicates the activity of the Cas9 variant being measured.

To make it easier for researchers to make cells that optimally express Cas9 or dCas9 repressor or activator proteins, Cellecta offers a combination of four Cas9 expression constructs at a reduced price when purchased in conjunction with one of the CRISPR-Test Assays.
As described in the product table, you can get four packaged Cas9 or dCas9 expression constructs—each with the Cas9 protein driven by a different promoter (CMV, EFS, RSV, and SFFV)—at half price when purchased together with the appropriate CRISPR-Test Assay.