Pooled shRNA Screening Libraries
Screen thousands of shRNA in a single cell culture plate, without the need for robotics, with pooled shRNA screening libraries from transOMIC technologies. Pooled shRNA screening requires low multiplicity of infection (MOI) transductions to ensure that each cell in the population only expresses a single shRNA. This requires shRNA that are potent even at single integrations in the genome. transOMIC pooled shRNA screening libraries are created using shERWOOD algorithm-designed hairpins and are provided in a microRNA scaffold, which minimizes off-target effects (see link below).
Developed by Dr. Greg Hannon and colleagues at Cold Spring Harbor Laboratory, the algorithm selects designs based on those sequence biases and requirements shown by shRNA scored as potent in a pooled screen. This makes the new shERWOOD-based shRNA uniquely suited for pooled screening.


Choose the best promoter for your cells

• Select the optimal promoter for your target cell line with a choice of promoters- choose from SFFV, hCMV, mCMV, hEF1a, and mEF1a


Your choice of Format

• In vitro or in vivo pool formats. Pools can be subdivided into minipools for lower complexity and higher representation for in vivo or other applications that require less complex pools
• Choice of gene coverage - premade gene families or custom gene sets
• Ready to use lentiviral particles or plasmid DNA format 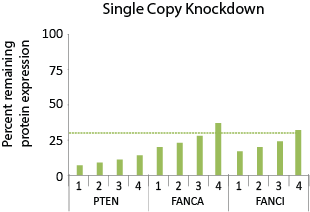 Pooled shRNA screening requires shRNA capable of knocking down its intended target while expressed from a single integration in the genome. Early generation shRNA libraries include a high number of shRNA constructs unable to achieve this possibly due to their designs being based on siRNA design rules rather than shRNA (which go through processing in the microRNA biogenesis pathway and have different requirements for optimal processing and function). In addition, shRNA pools created via chip-based method are known to contain a high number of mutations which limits their functionality. The shERWOOD algorithm efficiently selects designs that are potent at single copy (Figure 1) making them uniquely suited for pooled screening.
To learn more about the Sensor Screen underlying the shERWOOD algorithm see link below. 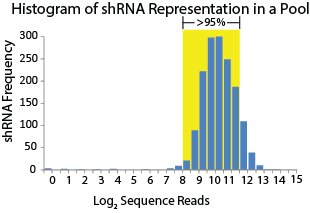 Figure 2. Representative histogram for pooled shRNA library representation showing that >95% of constructs are within 5-fold of the mean.

Importance of equimolar distribution in a pooled shRNA screening library:
Changes in the relative distribution of the shRNA in a pool indicate a selective advantage or disadvantage during the screening process and are detected using next-generation sequencing (NGS). To ensure that artificial changes in population are not introduced, pools should be constructed to minimize variation in representation across hairpins. For example, false negative results can occur when an shRNA is under represented in the population and lost by chance due to low representation during transduction, insufficient cell plating during passaging, or insufficient sample size.
transOMIC pooled shRNA libraries start with sequence-verified arrayed shRNA resulting in better normalization of shRNA representation in pools. Typical pooled libraries have a relatively narrow range of shRNA distribution across the pool. >95% of the shRNA are within a 5-fold of the mean (Figure 2).

Choice of promoter for hard to transduce cells

Mammalian promoters may differ in expression level or be silenced over time depending on the target cell line. Variation in expression level can affect fluorescent marker expression as well as knockdown efficiency. The Spleen Focus Forming Virus (SFFV) LTR provides a functional promoter in a number of human and mouse cell lines and is standard in the ZIP lentiviral vector used to create pooled shRNA screening libraries. However, for cell lines where a different promoter may be optimal, the ZIP promoter testing kit (TLN0005-TR) is available with a panel of vectors to quickly test for optimal expression in target cell lines. The ZIP lentiviral vector is available with five different promoter options (SFFV, human or murine CMV, human or mouse EF1-alpha) driving expression of shRNA (see schematic above). The fluorescent marker and shRNA are on the same transcript allowing the level of fluorescence in the cell to be used as a direct indication of shRNA expression through visual inspection. Ready-to-use viral particles for each of the five vectors are provided for transduction in target cell lines of interest to determine the optimal promoter for efficient shRNA expression.

The ZIP promoter selection kits (TLN0005-GVO-TR and TLN0005R-GVO-TR) provide sufficient viral particles of a non-targeting shRNA in each vector to transduce the target cell line and determine the optimal promoter.

In vitro, in vivo and ex vivo screening strategies have different requirements for pool formatting. In vivo and ex vivo screens require smaller, less complex pools to facilitate a higher shRNA representation while in vitro screens can be efficiently performed with higher complexity pools. Pooled shRNA screening libraries are available as viral particles that are ready-to-screen or plasmid DNA that can be packaged as needed for small or large-scale screens. In addition pools have been subdivided into mini pools of ~1000 shRNA per pool to enable low complexity and higher representation for in vivo and other screening applications.

• Lentiviral pooled shRNA libraries provided as viral particles include enough virus to perform a screen at 500-1000-fold representation with at least 2 biological replicates.
• Libraries provided as plasmid DNA include enough plasmid for more than 3 packaging reactions. Total viral particles generated will depend on packaging efficiency, but is expected to provide enough viral particles to perform a screen in multiple cell lines at 500-1000-fold representation with 3 biological replicates.

Custom pools can be created from any shRNA Content you like, you can obtain plasmid DNA or lentiviral particles at titers up to 10^9TU/ml, formatted for in vitro, or in vivo screening, with a choice of promoters or fluorescent reporters. Contact us at info@biocat.com for more information and pricing.

NGS Sequencing kits have been optimized to allow multiple samples to be analyzed simultaneously saving time and sequencing costs. Index up to 12 samples for NGS multiplex analysis (Cat.# TRP0002-TR).

A cost effective way to simplify your pooled RNAi screen Analysis: Send us the genomic DNA from your screen and we will return counts for each hairpin. Our optimized protocols provide reproducibility and a quick turnaround time (4-6 weeks).
Related Links