Avoid the challenges of viral transduction systems with the new EEV nonviral, non-integrating plasmid-based expression vector system. The technology is based on the Epstein-Barr Nuclear Antigen-1 (oriP-EBNA1) that has the ability to replicate in synchrony with the host genome by attaching to the host chromatin and replicating with each cell cycle division. This results in an extended presence within a host cell without integration or modification of the host´s genome. Our partner SBI has developed an enhanced version of the oriP-EBNA1 technology called the Enhanced Episomal Vector (EEV) platform. The major distinguishing feature of the EEV system from viral or other plasmid-based approaches is its capability to create long-term expressing cell lines without any risk of genomic integration or alterations. This new technology enables sustained transgene expression for several months in both in vitro and in vivo applications.

EEV cloning and expression vectors as well as reporter vectors in constitutive and cumate-inducible formats are offered.

A new water-soluble version of cumate which has been validated for in vivo applications is also available.

SBI has built two formats of EEV cloning and expression vectors to build your own constructs. The first features a potent CAGs promoter driving constitutive transgene expression (Cat#EEV600A-1-SBI). The second is an inducible EEV expression vector
that features the ultra-tight cumate inducible system in an all-in one format (catalog# EEV610A-1-SBI). Both vector formats feature a Multiple Cloning Site (MCS) to insert a cDNA, microRNA, etc. sequence into the EEV vector as well as the EBV oriP origin and
the EBNA1 factor for propagating the episome for sustained transgene expression. The available cloning and expression EEV vector formats are shown below.

SBI has built EEV reporter plasmids featuring a GFP-T2A-Luciferase expression cassette for reporting sustained transgene expression in a constitutive format (cat# EEV604A-1-SBI) or as an all-in-one cumate inducible format (cat# EEV605A-1-SBI). The constitutive EEV reporter construct cat# EEV604A-1-SBI was transfected into HEK293T cells and the GFP transgene expression monitored over a period of several weeks. HEK293T cells in a 24-well culture dish were transfected once with 0.5 ug of EEV604A-1-SBI reporter plasmid DNA. The GFP signals were then monitored over a period of several weeks. The EEV604A-1-SBI construct map and sample cell images from 2 days and 11 days after transfections are shown below.

The cumate inducible EEV reporter construct (cat# EEV605A-1-SBI) features a cumate-inducible promoter driving the expression of GFP-T2A- Luciferase as well as a constitutive EF1 promoter expressing the CymR repressor and a Puromycin selection cassette. The EEV605A-1-SBI cumate switch inducible reporter is silent until the addition of the inducer cumate solution (Cat# QM150A-1-SBI, 10,000x concentration). Cumate was added at a concentration from the 10,000x stock daily at a final concentration in the medium of 300 ug/ml and cells imaged for GFP induction. The GFP induction appeared after 2 days and then expression was detected for 72 days (2.5 months) after the original transfection. The EEV605A-1-SBI construct map and sample data for the minus cumate and the 11 and 72 day expression data are shown below. 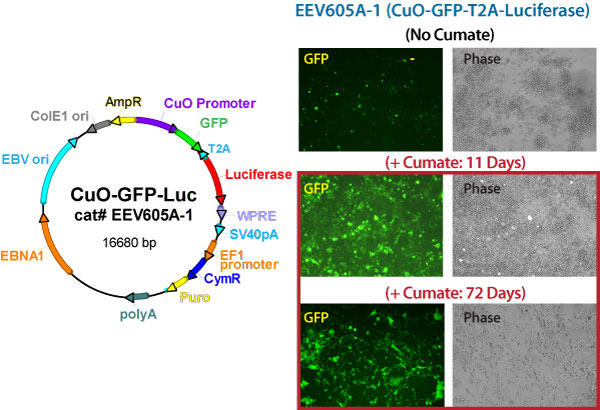 The constitutive EEV604A-1-SBI CAGs-GFP-T2A-Luciferase construct (8 ug plasmid DNA) was introduced into test mice through hydrodynamic tail vein injection (HDD). This procedure leads to high plasmid DNA transfection of the livers of mice in vivo. The test mice (n=3) were imaged for body luminescence in the liver area post HDD from Day 1 up until Day 80. The results show that robust EEV-expressed luciferase expression is readily detectable at very high levels through day 40. Luciferase quantitative data for the test mice in graphical form as well as bioluminescent animal imaging data are shown below.

The Cumate inducible EEV605A-1-SBI GFP-T2A-Luciferase reporter was also tested in mice. The EEV605A-1-SBI CuO-GFP-T2A-Luciferase plasmid was introduced into test mice (n=3) by using 5 ug plasmid and the HDD injection procedure on Day 0. The water-soluble version of the inducer cumate compound (cat# QM150A-1-SBI) was injected by IP (1.5 mg) per animal to induce EEV expression. The mice were then imaged for luminescence activity through full body scans and liver expression levels quantitated from Day 2 through day 10. Cumate induction of luciferase mouse images for Day 2 after cumate addition are shown below. 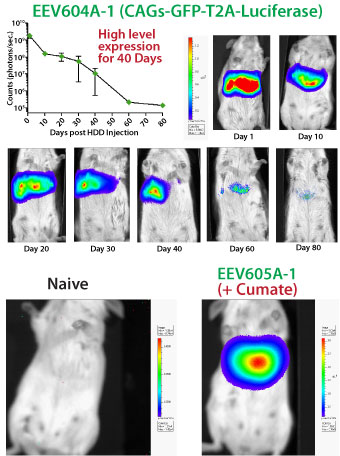 Contact us for custom EEV cloning and DNA production
How does EEV Compare to Other Episomal Technologies?
The Cumate Switch Inducible System