Cellecta’s CloneTracker™ 50M Lentiviral Barcode Library enables the tracking of individual clones derived from a population of cells. The library contains more than 50 million lentiviral constructs with different barcode sequences. When a cell population is transduced with this barcode library, the barcodes integrate into the genomic DNA of the cells. The result is a select starter founder population where almost every cell has a different, heritable, DNA-sequenceable barcode integrated into its genomic DNA.

Since the barcode is stably integrated, it is passed onto any cell progeny when genomic DNA is replicated. This feature allows researchers to track cell proliferation over the course of an experiment. For instance, it is possible to: 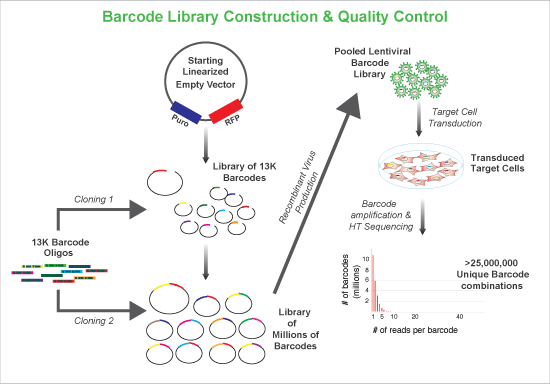 Advantages of Barcodes with Precise, Known Sequences in Lentivectors
• Broad Applicability: VSV-G pseudotyped lentiviral particles efficiently transduce virtually any mammalian cells
• Easy quantitation: Library contains 50 million barcodes designed to be easily sequenced with Illumina NextSeq, HiSeq, and GAIIx NGS platforms
• Cell-tracking, simplified: Label as many as 1 million cells with unique barcodes in one experiment
• Stable Barcode Integration to Permanently Label Cells: When transduced into cells, lentiviral vectors integrate into the host cell genome
• As the host cells divide, the barcode sequences in the lentiviral vector will also replicate and be passed onto daughter cells
• Cells can be treated, grown for several passages, frozen and thawed, and the sequences within the lentiviral vector will remain in the host cell
• After selection, treatment, or differentiation, just extract genomic DNA, amplify, and sequence to identify and quantify barcodes present in the selected cell population