For researchers investigating tumor progression, drug resistance, differentiation, development, hematopoiesis, and other related areas, there is considerable interest in understanding the heterogeneity of cell populations in both cultured and in vivo settings. Studies facilitated by labeling cells with a stable heritable marker such as a CloneTracker barcode include:
• how cell heterogeneity changes in response to drugs or other selections
• which traits allow cells to survive under different conditions
• how cell population diversity might change with differentiation or disease progression

Barcoded libraries, combined with next-generation sequencing (NGS), enable quantitative tracking of cell populations and clonal cell progeny. With these barcodes, cells can be permanently labeled and progeny tracked. Cell barcoding may be used to quantitatively assess representation of cells derived from a specifically barcode-tagged clone in a descendant population. For example, Cellecta and Amgen collaborated to use this sort of approach to assessing the heterogeneity of tumors resulting from xenograft implantation. Based on this work, Cellecta developed its original CellTracker Lentiviral barcode library to introduce cell-specific unique barcodes into virtually any mammalian cell population: 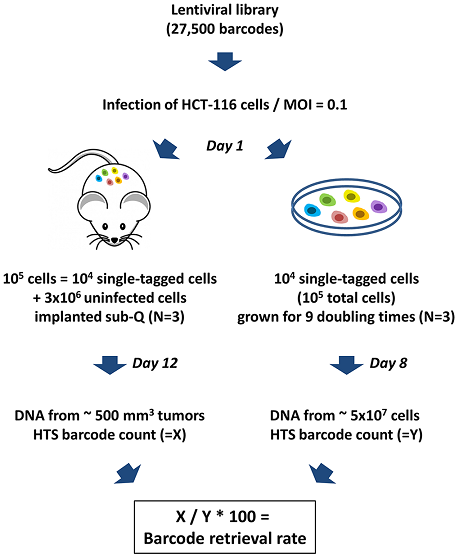 Tracing individually-labeled HCT-116 cancer cell clones in vitro and in vivo.
A lentiviral library containing 27,500 unique barcodes was used to transduce HCT-116 cells at an MOI of 0.1. Pools of 10e5 cells, corresponding to 104 individually tagged cells were either admixed with 3×10e6 cells and implanted subcutaneously into NSG mice or grown in culture in vitro. Cells were harvested after 9 days and tumor removed after 12 days, and total DNA preparations from cells or tumors were subjected to the barcode retrieval procedure.

The newest addition to the Barcode Library product line are CloneTracker XP Libraries for labeling cells with an RNA expressed barcode readily detected with RNA-Seq analysis.
Libraries expressing unique barcode sequences on mRNA can be used in in conjunction with single-cell RNA sequencing to identify cell subpopulations expressing distinct sets of genes containing differentiating cellular markers. For these single-cell expression analysis studies, the barcodes are positioned just before the poly-A tail of a marker or selection gene in the lentiviral library. When the library constructs integrate into the genomic DNA after transduction, the modified gene transcript is expressed with the barcode so the barcode can be detected in the cDNA generated using RNA-sequencing approaches.