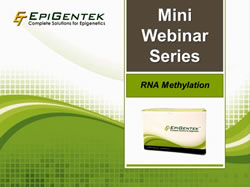 For absorbance-based quantitation of N6-methyladenosine in RNA in an ELISA-like format.

For fluorometric quantitation of N6-methyladenosine (m6A or 6mA) in RNA.

For colorimetric quantitation of m6A in urine using an inhibitory competitive immunoassay method.

For measuring total m6A demethylase activity/inhibition using nuclear extracts or purified m6A demethylases like FTO and ALKBH5 from a broad range of species.

For fluorescence-based quantitation of global 5-mC RNA methylation in an ELISA-like format.

Use Epigentek's MethylFlash Kits for the quantification of epigenetic parameters.