The phiC31 integrase is a site-specific recombinase encoded within the genome of the bacteriophage phiC31. The phiC31 integrase mediates recombination between two ~34 base pair sequences termed attachment sites (att), one found in the phage and the other in the bacterial host. This serine integrase has been show to function efficiently in many different cell types including mammalian cells. In the presence of phiC31 integrase, an attB containing donor plasmid can be unidirectional integrated into a target genome through recombination at sites with sequence similarity to the native attP site. These sites are termed pseudo-attP sites. phiC31 integrase can integrate a plasmid of any size, as a single copy, and requires no cofactors. The integrated transgenes are stably expressed and heritable. 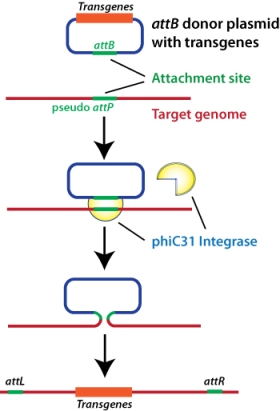 The classic Oct3/4, Sox2, Klf4 and cMyc factors have been adapted to the integrase system. The pCOBLW phiC31 reprogramming vector features the iPSC factors driven by a potent CAGs promoter with the factors separated by P2A elements. HS4 insulators flank the expression cassette and a functional attB site directs the integration of the entire plasmid into pseudo attP sites in any genome. The vector is engineered with FRT sites for later excision using standard FLP recombinase methods. After co-transfection of the reprogramming vector with the phiC31 expression plasmid (catalog# FC200PA-1) and integration, you can monitor for successful transfection with GFP fluorescence and select for positive colonies using the built-in Neo marker. The reprogramming iPSC factor donor vector and the phiC31 expression plasmid maps are shown below. 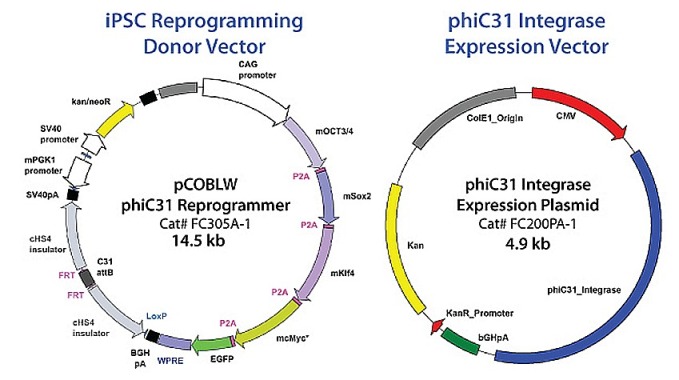 A major advantage of using the phiC31 integrase system, is that copy number control is in your hands. The majority of clones that undergo integration events have single insertions. To verify the copy numbers in your targeted cells, you can perform Southern blot analysis on their genomic DNA. Shown below is an example of mouse genomic integration analyses using seperate restriction digests with Eco01091 and EcoRV with 10ug gDNA. The reason for two separate enzyme digests is to assess the copy number status. The probe used in these Southern blot analyses was for GFP present in the pCOBLW iPSC integrase vector. The data below show the copy number status for 16 different iPSC lines and demonstrate that 14 out of 16 lines show single insertions (88%). 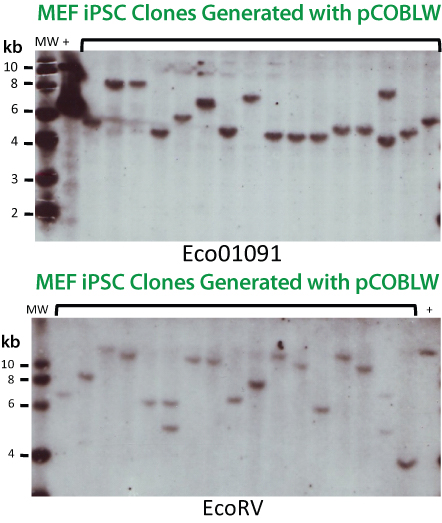