HyPer is a unique genetically engineered fluorescent protein allowing ratiometric measurement of hydrogen peroxide. HyPer can be directly expressed in a cell or a cell comparment and demonstrates high specific submicromolar sensitivity to H2O2.
Reactive oxygen species (ROS) are tightly involved in normal cell function as well as development of a wide variety of pathologies. Up to date the most widely used sensors for intercellular ROS generation were dichlorofluorescein (DCF) derivatives. DCF derivatives fluoresce after oxidation by ROS, however they have several serious disadvantages: they are not specific, i.e. are sensitive to multiple types of ROS; they cannot be targeted to specific intracellular compartments; and, most importantly, they can produce ROS upon exposure to light, which results in artifactual ROS generation and signal amplification.
HyPer is the first fully genetically encoded fluorescent sensor capable for high specific detection of intracellular hydrogen peroxide (H2O2) [1], one of the main ROS generated by cells. Developed on the basis of yellow fluorescent protein inserted into the regulatory domain of Escherichia coli protein OxyR (OxyR-RD) [2], HyPer demonstrates submicromolar affinity to H2O2 and at the same time is insensitive to other oxidants. HyPer does not cause artifactual ROS generation and can be used for detection of fast changes of H2O2 concentration in different cell compartments.

HyPer is a fluorescent protein which has two excitation peaks with maxima at 420nm and 500 nm, and one emission peak with maximum at 516 nm.

HyPer allows ratiometric measurement of hydrogen peroxide: upon exposure to H2O2, the excitation peak at 420 nm decreases proportionally to the increase in the peak at 500 nm.

Similarly to wild-type OxyR, oxidized HyPer is able to be reduced inside cells.

Isolated HyPer demonstrates submicromolar sensitivity to H2O2, at the same time it is insensitive to the other oxidants tested: superoxide, oxidized glutathione, nitric oxide and peroxinitrite.
HyPer is a 52 kDa protein comprising 478 amino acids. It can be directly expressed by target cells, both individually and in fusion with a specific localization signal. HyPer successfully folds and retains high sensitivity to hydrogen peroxide both in bacteria and in mammalian cells.

HyPer Use
HyPer can be used for monitoring hydrogen peroxide production inside living cells during various physiological and pathological conditions. HyPer can be expressed in cells or cell organelles of interest from HyPer expression vector. If required, stable HyPer transformants can be selected using G418 [3].
Monitoring of changes in green emission of HyPer during intracellular H2O2 production should be carried out by excitation by violet or blue light. Intensity of excitation light must be individually determined for particular biological system and instrumentation.

Important note: Yellow fluorescent core of HyPer undergo partial photoconversion to a dark state upon irradiation with blue light. It means that in the beginning of time series imaging of cells expressing HyPer apparent “bleaching” of green fluorescence occurs. But unlike real bleaching, in case of HyPer signal drops to the level of dynamic equilibrium between fluorescent and dark state of the chromophore, and then remains stable. 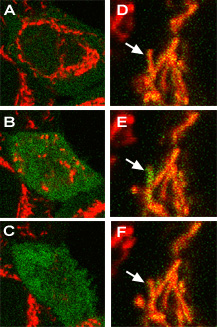 Confocal images of HeLa cells expressing cytosolic (A-C) or mitochondrial (D-F) form of HyPer during Apo2L/TRAIL-induced apoptosis. (A-C) Fluorescence of cytosolic HyPer (green) and TMRM (red) in Hela cells in 176 min (A), 200 min (B) and 240 min (C) after Apo2L/TRAIL addition. (D-F) Increase in the level of H2O2 in temporarily depolarized mitochondrion during apoptosis. The images were collected from a region of interest in a single cell.

HyPer-Cyto When expressed in mammalian cells, this variant is evenly distributed throughout the cytosol and the nucleus.

HyPer-dMito Two copies of mitochondrial targeting sequence derived from subunit VIII precursor of human cytochrome C oxidase are fused to HyPer N-terminus. When expressed in mammalian cells, this variant is localized in mitochondria.

HyPer-Nuc Three copies of the nuclear localization signal are fused to the HyPer C-terminus. When expressed in mammalian cells, this variant is localized in the nuclei.

HyPer-AS Variant HyPer-AS codon usage is optimized for high expression in Arabidopsis and Saccharomyces. This variant is available in Gateway® entry clone.

Notice to Purchaser: This HyPer-related material (also referred to as “Product”) is covered by Evrogen patent application pending. Some elements of this material may be also covered by third party patents issued and applicable in certain countries. Because obtaining of this material does not include any third party license, users of this product may be required to obtain a patent license depending upon the particular application and country in which the product is received or used.
The material is distributed for the purpose of compliance with Nature Publishing Group Editorial Policies on availability of published materials and data, and for a fee covering the costs of material development, producing and shipping/handling.
CMV Promoter: The CMV promoter is covered under U.S. Patents 5,168,062 and 5,385,839 and its use is permitted for research purposes only. Any other use of the CMV promoter requires a license from the University of Iowa Research Foundation, 214 Technology Innovation Center, Iowa City, IA 52242. Related Links