Exosomes contain distinct subsets of RNAs and proteins depending upon the cell type from which they are secreted, making them useful for biomarker discovery. Additionally, their natural function as cell to cell communication vehicles makes them attractive for use as therapeutic shuttles to deliver biological molecules or drugs to target disease cells. The RNA content varies, depending upon the cell from which the exosomes was secreted. The mechanism of how specific RNA sequences are selectively packaged into exosomes is an intensive area of investigation.

XMIR and AXMIR RNA Oligos
The XMIR and AXMIR kits allow for cell-mediated generation of ready to use exosomes packed with a miRNA (XMIR) or anti-miRNA (AXMIR) of choice. These exosomes can then be used to efficiently knock down native targets in recipient cells or be used to study biological pathways by which functional exosomal miRNA cargo is delivered to target cells. This technology is especially attractive as a means to study the efficacy of exosome mediated delivery of potential therapeutic miRNAs or anti-miRNAs to disease cells.

To generate XMIRs and AXMIRS, an oligo is designed that fuses the XMotif sequence to a miRNA or anti-miRNA sequence, which results in exosomal loading of the RNA oligo. The oligo is first transfected into a culture of the exosome generating cell type of choice. IMPORTANT NOTE: Be sure to culture your exosome generating cell lines in media that does not contain standard FBS. There are high levels of cow exosomes present in FBS. Instead, use SBI´s Exo-FBS Exosome-depleted FBS Media Supplement (Cat# EXO-FBS-50A-1-SBI) in place of standard FBS media supplements. After 24 hours, exosomes packed with the XMIR or AXMIR are precipitated using ExoQuick-TC. After resuspension in PBS, the XMIR or AXMIR-loaded exosomes are ready to be added to target cells. Any miRNA, anti-miRNA or even siRNA sequence can also be used in a transfection-ready oligo for use in the XMIR/AXMIR system. 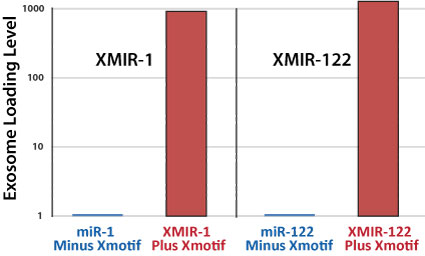 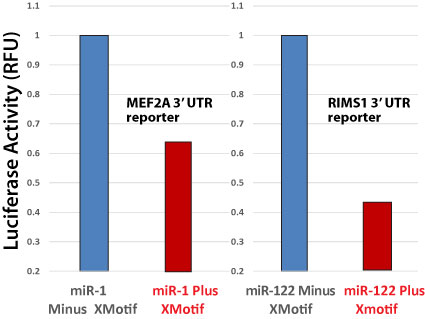 The XMIR-1 and XMIR-122 loaded exosomes were added to reporter HEK-293 cells previously transfected with a luciferase gene linked to the 3´ UTR for MEF2A, a known miR-1 target, or RIMS1, a known miR-122 target, respectively. After 24 hours, luciferase assays were performed to determine bioactivity of the XMIR miRNAs delivered to target cells via exosomes. Notably, exosomes from cells transfected with 20 nM miR-1 oligo caused maximum luciferase down regulation, whereas exosomes from cells transfected with 100 nM miR-122 caused maximum luciferase down regulation, illustrating the need to optimize conditions for each XMIR/AXMIR oligo. The degree of knockdown XMIR-1 and XMIR-122 loaded exosomes displayed on the MEF2A and RIMS1 luciferase reporters are similar to that seen for transfections of miRNA oligos using a similar reporter assays, indicating that exosome mediated delivery of miRNAs occurs at maximal efficiency. 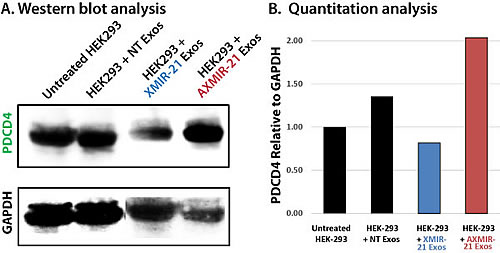 XMIR-1 lentivector expression construct was transfected into HEK293 cells cultured in DMEM media with SBI´s exosome-depleted FBS media supplement in place of standard FBS to remove contaminating bovine exosomes. HEK293 exosomes were collected after 48 hours. The exosomal RNA was purified and converted into qPCR-compatible cDNA. Relative amounts of XMIR-1 packaged into exosomes from the XMIRXP-1 lentivector were quantitated by qPCR with miR-16 used as a reference exosome control signal. The delta-delta Ct calculation for XMIR-1 is shown in the bar graph.

XMIRXpress Cloning and Expression Lentivector
SBI also provides a cloning and expression XMIRXpress lentivector plasmid (Cat# XMIRXP-VECT-SBI) to allow you to clone any miRNA or anti-miRNA of your choice and fuse it to the XMotif sequence upon ligation. The XMIRXP-VECT plasmid is provided in a linearized form for rapid cloning. Simply design two DNA oligos for the top and bottom strand as detailed below, anneal the top and bottom oligos, and ligate directly into the XMIRXP-VECT plasmid. An example of cloning hsa-miR-155-5p (MIMAT0000646) is shown below. First, look up miRNA of interest using miRBase (www.miRBase.org) and identify what mature miRNA sequence you wish to express as an XMIR. Convert the U residues to T residues and create the top and bottom strand oligos with restriction enzyme site overhangs as shown below. The XMIRXpress lentivectors can be used in transfection experiments to test the exosomal loading of the XMIR and can also be packaged into lentivirus to easily create stable XMIR producer cell lines constitutively secreting exosomes packed with XMIRs. To create stable cell lines stably expressing XMIRs that will be loaded into secreted exosomes, package the XMIRXpress lentivector plasmid into virus using SBI´s lentivirus packaging systems. Visit Lentiviral packaging systems for product information on the kits to perform virus packaging.