XPack Exosome Protein Engineering
Exosomes are secreted nanoshuttles that facilitate communication between cells and organs and are found in various biofluids including blood, urine, amniotic fluid, breast milk, malignant ascites fluid, and cerebrospinal fluid. Their natural function as cell to cell communication vehicles makes them attractive for use as therapeutic shuttles to deliver biological molecules or drugs to target disease cells.

The XPack technology allows for cell-mediated generation of ready to use exosomes packed with any protein of choice. These exosomes can then be used to efficiently deliver proteins to target cells to alter or supplement biological pathways or be used to study exosome trafficking in vivo.

SBI has optimized a specific peptide sequence that targets a protein to the interior exosomal membrane, allowing the fusion protein to be packaged into exosomes for secretion. This "XPack" peptide sequence has been incorporated into the XPack cloning and expression lentivectors, allowing for reporter proteins or any protein of interest to be loaded into exosomes within a producer cell line. 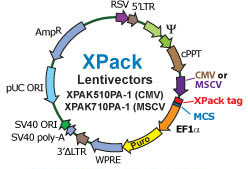 These engineered exosomes can then be isolated and delivered to target recipient cells. Additionally, stable XPack cell lines have been generated that serve as a constant source of exosomes loaded with reporter protein cargo, enabling tracking of exosome dynamics in both human cells and in vivo murine models. Purified, ready to use exosomes from these stable cell lines are also available as part of the comprehensive XPack system. 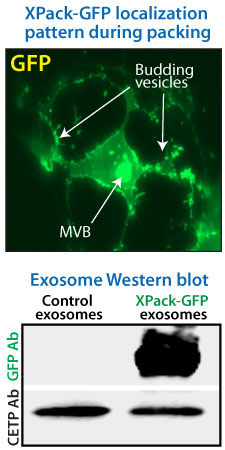 After 48 hours, exosomes were isolated using ExoQuick-TC® and analyzed by Western blot for GFP loading (lower right panel). Equal amounts of exosomal lysates (15 ug) were separated on gradient SDS PAGE gels and detected for GFP protein expression. The control for exosome loading was an anti-CETP antibody. As shown in the image, XPack-GFP exosomes had a very high abundance of GFP protein loaded as cargo.

XPack-GFP Exosome Delivery to Target Recipient Cells
The XPack-GFP exosomes isolated from transfected cells described above were then added to recipient HEK-293 cells to test for GFP delivery. The cells were first imaged by fluorescent microscopy to assay uptake of XPack-GFP proteins (lower left panels). The patterns were consistent with endocytosis of the exosomes and delivery of the XPack-GFP protein cargo. Subsequently, these recipient cells were washed twice with PBS and cellular lysates were prepared for Western blot analysis probed with anti-GFP antibodies. Anti- GAPDH was used as a cellular protein loading control. The Western blot data further verified the successful delivery of GFP proteins to recipient cells via the XPack exosome engineering technology (lower right panels). 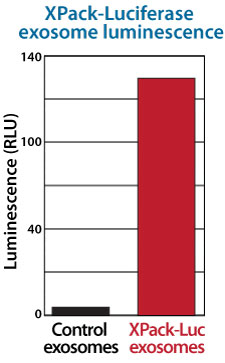 XPack Delivers Luciferase to Target Cells
XPack-Luciferase exosomes (250 ug) were then added to approximately 400,000 HEK-293 recipient cells 6-well plate culture dish. Luciferase activity within these recipient cells were measured after 24 hours and data are shown below. Controls included cells not treated with exosomes (Untreated cells) or cells incubated with exosomes from untransfected HEK-293 cells (Cells + HEK exosomes). The image inset is from imaging live HEK-293 cells treated with either Control or XPack-Luc exosomes for 24 hours. Approximately 400,000 HEK-293 cells were incubated with 150ng/ml D-Luciferin substrate for 2 minutes at ambient temperature prior to signal imaging. 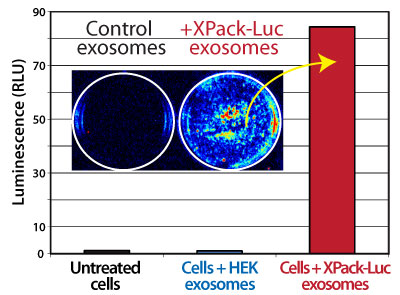