Discover RNA and Protein Biomarkers in Patient Biofluids and Culture Media
• Simple one-step precipitation
• No time-consuming ultracentrifugation
• No complicated syringes required
• Less expensive than costly antibodies and beads
• More effective than any other method
• Isolate intact exosomes for functional studies as well as microRNA and proteins
• Compatible with biofluid from any species
• Use as little as 250 µl of serum, plasma (see also special kit), or tumor ascites fluid, or 5 ml of media, spinal fluid, or urine
• Exosome depleted FBS available to avoid bovine derived exosomes in your experiments

Exosomes are 40 –100 nm membrane vesicles secreted by most cell types in vivo and in vitro. Their cargo reflects the origin and pysiological stet of the source cells.
Exosomes are found in blood, urine, amniotic fluid, malignant ascite fluids and contain distinct subsets of microRNAs depending upon the tumor from which they are secreted. SBI´s ExoQuick and ExoQuick-TC polymer-based exosome precipitation reagents make microRNA and protein biomarker discoveries simple, reliable and quantitative.

Circulating exosomes isolated by ExoQuick and ExoQuick-TC yield exosomal RNA and protein with greater purity and quantity than chromatography, ultracentrifugation or DynaBeads. This enhances the senitivity and accuracy of downstream applications, such as qRT-PCR Profiling of miRNA and mass spectrometric or electrophoretic analyses of exosomal proteins.
Enrich for circulating exosomal microRNAs with ExoQuick or ExoQuick-TC (depending on the sample type) and accurately profile them using QuantiMir qPCR arrays.

Exosomes were isolated with different methods as indicated.
Exosomal RNA was purified and RNA quality and yield was accessed using a GeneQuant II. Small RNAs were analyzed with the Agilent 2100 Bioanalyzer Lab-on-a-Chip instrument system (Agilent Technologies, Santa Clara, CA), using the Agilent Small RNA chip and reagent kit. Approximately 100ng of isolated total RNA in 1μl was applied to each run. The manufacturer’s recommended protocol was strictly followed to obtain Bioanalyzer profiles for the size range 6 to 150 nucleotides (nt). The profiles were calibrated for size (nt) using the small RNA ladder supplied with the kit, containing markers of 20, 40, 60, 80, and 150 nt in size, as reference. The instrument software quantitated the peak area between 0 and 150 nt as small RNA region, the area within 10 to 40 nt as microRNA region, and provides percentages of miRNA detected for each sample.

Enrichment of Placental Alkaline Phosphatase
Exosomes were isolated with different methods as indicated.
The quantity of protein was determined by the Bradford microassay method (Bio-Rad Laboratories), using BSA as a standard. Proteins from each exosome isolate were standardized to the original sample volume and equal volumes were applied per lane of a 12.5% SDS-PAGE gel. Western immunoblotting was performed to analyze the presence of the specific marker protein, placental alkaline phosphatase (PLAP). The SDS-PAGE gel was transferred to a nitrocellulose membrane, the membrane blocked for 1 hour at room temperature with non-fat dried milk, and probed overnight at 4°C with primary antibody. The bound immune complexes were visualized by enhanced chemiluminescence (ECL, Amersham Life Sciences) and quantitated by densitometry (Un-Scan-it Software, Silk Scientific Corp.). 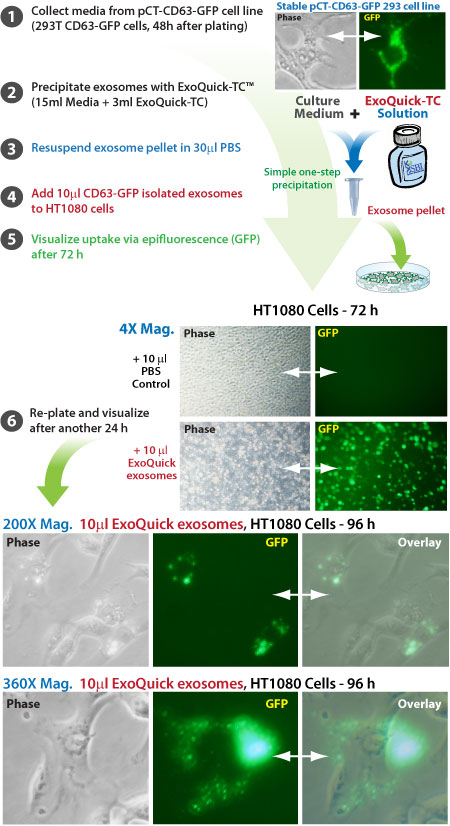 ExoQuick exosomes can be transfered between cells.
SBI created a stable 293TN cell line overexpressing the Cyto-Tracer™ pCT-CD63-GFP fusion protein (catalog# CYTO120-PA-1-SBI). The media from the cells was collected 48 h after plating and the exosomes from the media were precipitated using ExoQuick-TC. The exosome pellet recovered was resuspended in 30ul PBS and 10ul was added to newly plated HT1080 cells. HT1080 cells were visualized 72 h after the addition of the CD63-GFP labeled exosomes and then re-plated. Following another 24h, the cells were again visualized for GFP fluorescence and imaged. The exosomes appear to dock with the cells within 72 h and some are found to be internalized after 96 h.

New in the ExoQuick Product Line: ExoQuick-LP
Pre-clear Serum Lipoprotein Particles Before Exosome Isolation with the new kit ExoQuick-LP.
In order to study only the exosome-associated microRNAs and proteins, it is important to remove as many subcellular particles as possible from blood plasma or serum before the treatment with ExoQuick, particularly lipoprotein particles. Lipoproteins are the major lipid-based particles in the plasma and serum and it has been recently demonstrated that both high-density lipoproteins (HDLs) and low-density-density lipoproteins (LDLs) contain microRNAs (Vickers et al. 2011).

Scalable exosome isolation is possible now
The gold standard for isolating exosomes is an ultracentrifugation step, a technique that can be a barrier to high-throughput processing. Clearly, more scalable protocols that work on small sample volumes are needed as exosome analysis moves from research and development and into the clinic. SBI´s ExoQuick is such an alternative. With ExoQuick, exosomes can be isolated from as little as 100 μl of serum in just 2.5 hours, as can be seen in a recent paper from Khan, et al. (1)

Standard growth medium for most cells in culture require fetal bovine serum (FBS) as a growth supplement to DMEM. FBS is derived from bovine (cow) serum and contains a high abundance of cow exosome vesicles. These exosomes can interfere or cause significant background issues when studying the exosomes secreted from your cells of interest in standard culture conditions.

Our partner SBI has developed an exosome-depleted FBS growth supplement called Exo-FBS that has been stripped of bovine exosomes. Exo-FBS supports equivalent growth of many types of cells in culture, contains very low levels of cow CD63 positive exosomes and does not have any measurable bovine microRNAs. Perform your studies of cellular secreted exosomes in culture without the worry of contaminating cow exosomes in your experiments. No ultracentrifugation required. Available as standard FBS supplement or heat inactivated FBS media supplement (treated at 65°C for 15 minutes before bovine exosome removal).